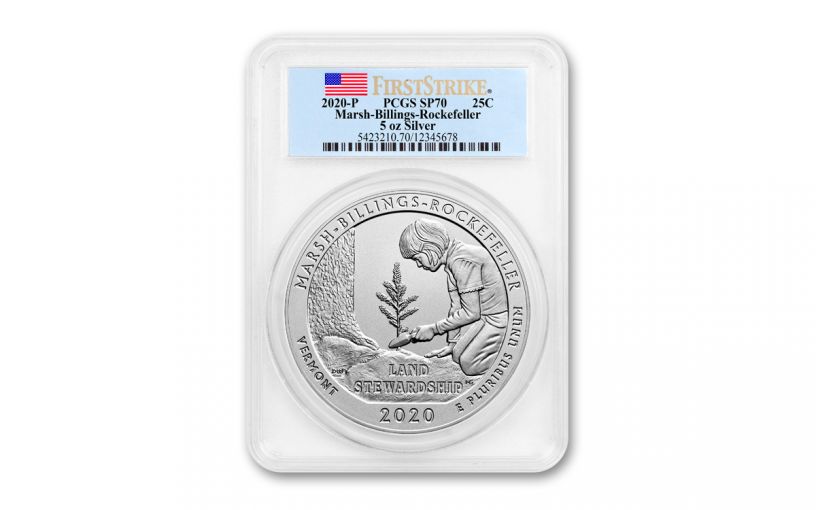 Availability: In Stock
This item will ship within 2 business days.
Item #
369123
CC Payments as low as
$142.50 / month
Add to Wish List Add to Wish List Wishlist is for registered customers. Please login or create an account to continue. Add to Compare

The U.S. Mint’s celebrated America the Beautiful Quarters® series continues its epic run in 2020 with the release of the Marsh-Billings-Rockefeller National Historical Park Quarter struck as a gigantic coin in five ounces of highly pure 99.9% silver! Measuring an incredible 76.2 mm in diameter, this coin is nearly twice the size of an American Silver Eagle!

The America the Beautiful series has proven extremely popular since it began back in 2010. For those who have been collecting from the start, each release has provided a new and exciting way to discover and appreciate all that America has to offer. The Marsh-Billings-Rockefeller National Historical Park in Vermont is a perfect example of a coin that presents collectors with a scene of America’s beauty that would likely be overlooked otherwise. It depicts a young girl planting a Norway spruce seedling. The design is meant to be symbolic of the life cycle of the Marsh-Billings-Rockefeller National Historical Park’s forest with the youngster a representation of a conservationist working to maintain a sustainable forest.

In addition, each 2020 Marsh-Billings-Rockefeller National Historical Park coin available in this offer has been graded by the Professional Coin Grading Service (PCGS) as being in stunning Specimen-70 (SP70) condition, a distinction that means these perfectly-graded coins have ZERO imperfections — showing all features and fields exactly as the engraver and mint intended. Plus, PCGS has certified that these are all First Strike (FS) coins, a designation that means that these coins were received by PCGS or an PCGS-approved depository within the first 30 days of their release. Collectors seek out these coins because they are produced with new dies and considered to have sharper strikes and deeper mirrors than those that are struck later. It will come sonically sealed in an acrylic holder with a special American Flag label.

About the Marsh-Billings-Rockefeller National Historical Park

The Marsh-Billings-Rockefeller National Historical Park in Vermont is the only national park dedicated to telling the story of conservation history and the evolving nature of land stewardship in America. The coin pays tribute to a series of three owners of the land. It was the boyhood home of George Perkins Marsh, one of America’s first conservationists. It was later purchased by Frederick Billings, who established a progressive dairy farm and created a managed forest system there. Finally, it was owned by Billings’ granddaughter, Mary French Rockefeller and her husband Laurence. The Rockefellers continued the conservation practices there before donating the land to the federal government.

Although the America the Beautiful collection is considered bullion, its five releases every year mean that each new release is only available for so long, so add this Brilliant Uncirculated (BU) Five Ounce Silver Marsh-Billings-Rockefeller National Historical Park coin to your collection before it’s too late!