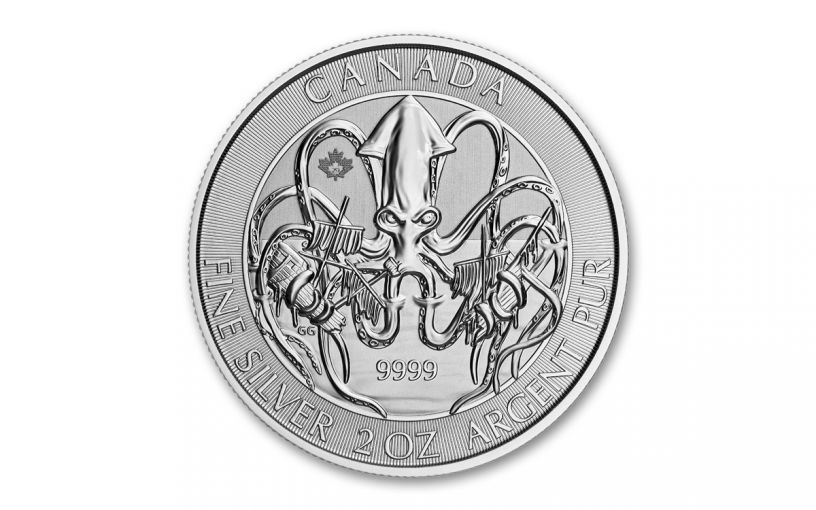 Availability: Out of Stock
This item is currently Out of Stock. Please sign up to be notified if this product becomes available.
Item #
359775
Add to Wish List Add to Wish List Wishlist is for registered customers. Please login or create an account to continue. Add to Compare

Canada Has Gone and Done it: They’ve Released the Kraken!

According to mythology, the Kraken is a legendary sea monster capable of pulling ships under water and feasting on the flesh of unfortunate sailors caught by its tentacles. Rooted in Scandinavian legends, the origins of this cephalopod-like creature can be traced back to Norse sagas that recount how these monsters lurk off the coasts of Norway and Greenland ready to pounce on unsuspecting seafarers.

This kraken is now the focus of the first release in Canada’s Creatures of the North series. Struck by the prestigious Royal Canadian Mint in two ounces of highly pure 99.99% silver, this legal-tender $10 coin features a terrifying image of a squid-like kraken ripping a ship in half. The kraken is literally glaring up off the surface of the coin in smug defiance. You can almost hear the ship’s crew screaming in terror as the many tentacled beast tears them to shreds.

While the kraken is steeped in folklore, science suggests the creature originated from sightings of giant squids. In fact, giant squid were first sighted in North America off the coast of Newfoundland and have been known to grow up to 50 feet in length. There are even documented reports of chilling encounters with the creatures. In one report from 1873, two fishermen and a boy in a rowboat came upon what they thought was a floating carcass only to have the creature grab their boat with two tentacles. As the boat was being pulled under, the boy grabbed an axe and hacked off the tentacles. The severed limbs were later shown to Presbyterian minister and amateur naturalist Rev. Dr. Moses Harvey, who documented the event.

Today, the kraken is also central to an almost cult-like catchphrase that originated from the 2010 film Clash of the Titans. During the film, Zeus, as played by actor Liam Neeson, orders his men to “Release the kraken!” – a phrase that has grown in popularity in the years since to mean kicking someone’s butt six ways from Sunday.

Each coin in Canada’s bi-annual Creatures of the North bullion series has been struck in Gem Brilliant Uncirculated (BU) condition and includes radial lines and a micro-engraved Maple leaf privy mark for added security. Inside the privy mark and visible only under magnification is the numeral “20” denoting the coin’s year of issue.

Hundreds of years ago, sailors were terrified by the Kraken, an astoundingly elusive-yet-dreadful sea monster. Today, the only thing you have to be afraid of is missing out on this stunning coin! Whether you’re a collector, enjoy learning about mythic beasts or are a silver stacker looking for something new, this 2020 Canada Two-Ounce Silver Creatures of the North Kraken coin will really float your boat!

This is one monster you don’t want to avoid. A nightmare to mariners, this Silver Kraken coin will be dream come true when you add it to your collection!