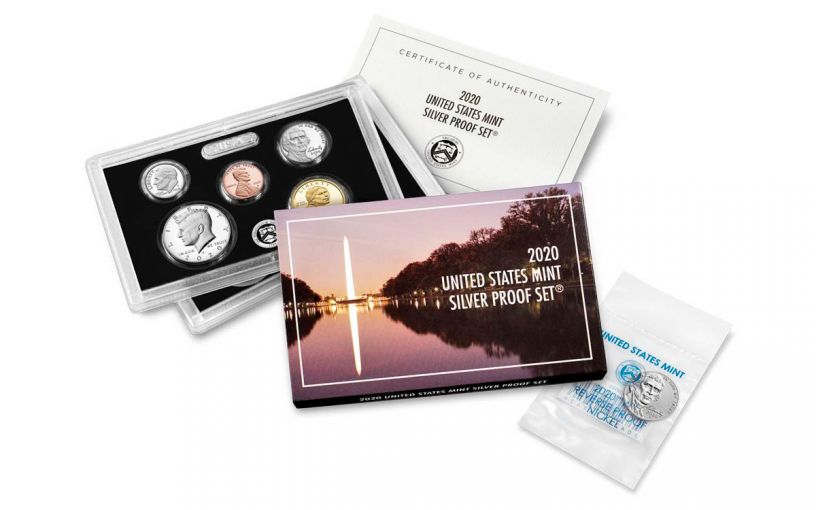 Availability: In Stock
This item will ship within 2 business days.
Item #
360802
Add to Wish List Add to Wish List Wishlist is for registered customers. Please login or create an account to continue. Add to Compare

Each year, the United States Mint’s Proof and Uncirculated coin sets make their way to hundreds of thousands of fans. For many collectors, however, this is just the prelude for the real treat yet to come. Released soon after the two sets make their debut is the annual Silver Proof Set. And for 2020, the U.S. Mint has included an exclusive Special Edition Jefferson Nickel Reverse Proof that will be available ONLY in this year’s Annual Silver Proof Set!

The first-ever Jefferson Nickel struck at the West Point Mint, this complimentary coin is the complete opposite of its traditional proof finish counterpart – and far more scarce! Unlike a regular proof that has frosted details rising over mirror-like fields, a reverse proof has mirrored details rising over frosted fields. The visual effect is remarkable! It will come packaged separately in a clear U.S. Mint plastic wrap and inserted into an envelope.

The United States Mint Silver Proof Set® itself consists of proof versions of the 2020 Lincoln Penny, Jefferson Nickel, Roosevelt Dime, all five America The Beautiful Quarters, Kennedy Half Dollar and the Native American Dollar that honors Elizabeth Peratrovich — each struck with the “S” mint mark. The dime, quarters and half-dollar were all struck in highly pure 99.9% silver. The ultimate in quality, beauty and value, these proofs are double-struck under intense pressures to bring out their intricate details and dazzling luster. That’s why it’s no surprise that these annual sets are a perennial best seller — and a favorite of collectors new and old since they were first issued in 1992!

While each of the coins in this U.S. Silver Proof Set is beautiful in its own right, the five one-year only America the Beautiful Quarters are certainly the highlights. These coins constitute the eleventh year of the series. United States territories feature prominently, with American Samoa and the U.S. Virgin Islands represented, while coins from state parks in Connecticut, Vermont and Kansas round out the five.

The entire set will come beautifully displayed in its original government packaging consisting of two clear plastic lenses — one for the quarters and one to house the other coins — and shipped in a full-color illustrated sleeve. It will also be accompanied by a mint-issued Certificate of Authenticity. The 2020 U.S. Silver Proof Set gives collectors the chance to appreciate this artistry of America’s circulating coinage just as it was intended —on coins with stunning proof finishes. Don’t wait; secure one or more for your collection now!

FEATURING ALL COINS FOR CIRCULATION – This 2020-S U.S. Silver Proof Set consists of each of the ten coins to be released for circulation in 2020. This includes a Native American dollar and five America the Beautiful quarters.

PHENOMENAL PROOF FINISHES – Each coin in the 2020-S U.S. Silver Proof Set has a stunning proof finish that brings out every detail in its design.

U.S. LEGAL TENDER – Each coin in this set is legal tender in the United States. Five of the coins are America the Beautiful quarters. The others are a dollar, a half dollar, a dime, a nickel, and a penny.

ONE YEAR ONLY MINTAGE – This set will only be struck in 2020. After that, it will never again be issued.

If you are looking for a way to appreciate the stunning, often overlooked designs of America’s circulating coinage, don’t miss your chance to own this 2020 United States Mint Silver Proof Set. Order yours now!