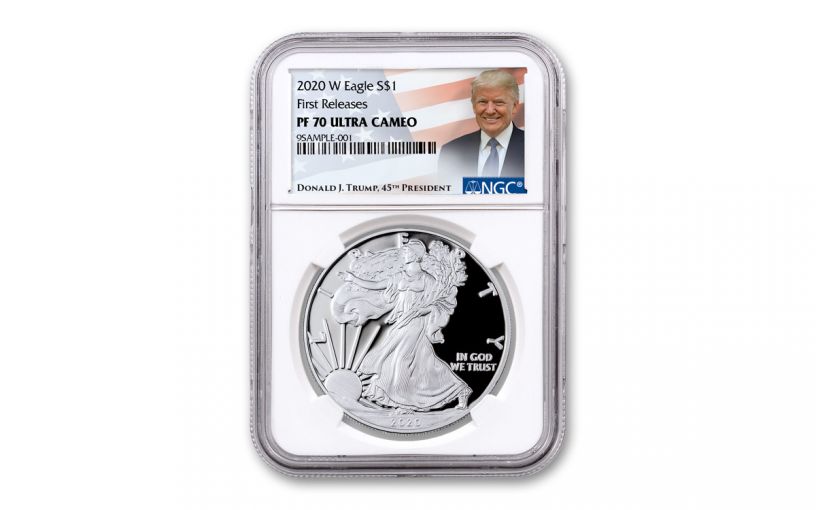 Availability: Out of Stock
This item is currently Out of Stock. Please sign up to be notified if this product becomes available.
Item #
358430
Add to Wish List Add to Wish List Wishlist is for registered customers. Please login or create an account to continue. Add to Compare

No matter why you love collecting American Silver Eagles or how you've come to appreciate them, we have the 2020 Silver Eagles that are right and ready for your collection. Whether you love them for their art or for their metal (or both!) we have a special offering of this classic beauty struck at the U.S. Mint’s branch mint at West Point and graded by Numismatic Guaranty Corporation (NGC) as being in flawless Proof-70 Ultra Cameo (PF70UC) condition, a distinction that means your perfectly-graded proof will have ZERO imperfections – showing all features and fields exactly as the engraver and mint intended.

In addition, NGC has graded your proof to be a First Releases (FR) coin, a designation that means it was received by NGC or an NGC-approved depository within the first 30 days of its release. Collectors seek out these coins because they are produced with new dies and considered to have sharper strikes and deeper mirrors than those that are struck later. It will also come sonically sealed in an acrylic holder with a white display core and an exclusive label that features a portrait of President Donald J. Trump, the 45th Chief Executive Officer of the United States.

Silver Eagles like these are perennial favorites, usually flying out of our vaults as soon as they arrive! Whether you're new to the series, a diehard collector or a silver stacker looking to add to your reserve, this is your chance to secure these 2020 Silver Eagles in perfect Proof-70 Ultra Cameo condition for your very own. Don't wait – order yours today!