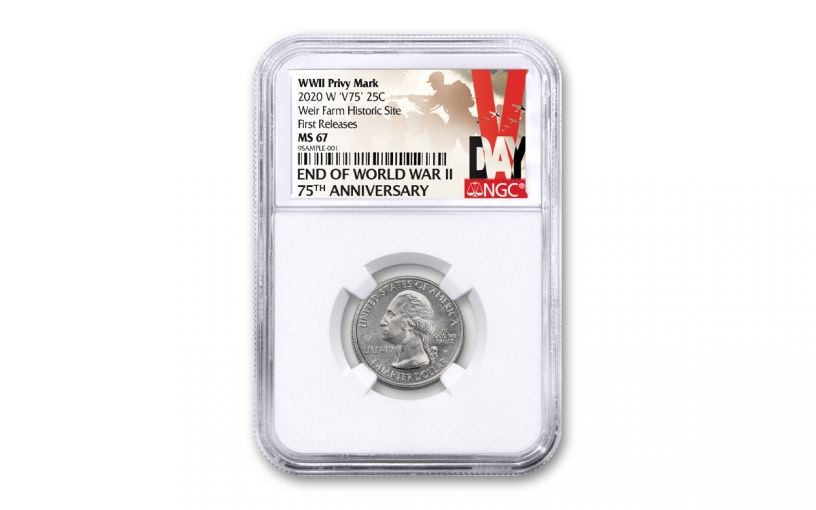 Availability: In Stock
This item will ship within 2 business days.
Item #
362445
CC Payments as low as
$149.98 / month
Add to Wish List Add to Wish List Wishlist is for registered customers. Please login or create an account to continue. Add to Compare

Connecticut’s America the Beautiful Quarter Is “Marked” for Greatness

We’ve managed to rescue a small hoard of the second ATB coin of 2020, the Connecticut Weir National Historic Site Quarter meant for circulation and had them certified and graded by the Numismatic Guaranty Corporation (NGC), one of the world’s leading third-party grading services! And here’s the good news: Each coin available in this offer has been graded by NGC in stunning Superb Gem Uncirculated Mint State-67 (MS67) condition! Plus, NGC has certified these quarters to be First Releases (FR) coins, a designation that means they were received by NGC or an NGC-approved depository within the first 30 days of its release.

ABOUT THE CONNECTICUT WEIR NATIONAL HISTORIC SITE QUARTER: Consisting of more than 60 acres of beautiful woodlands, fields and waterways, Connecticut’s Weir Farm National Historic Site has been described as a national legacy to American Impressionism, the creative spirit, and historic preservation. It’s also the only National Park Service site dedicated to American painting. Established in 1990, the site was part of property originally owned by American artist Julian Alden Weir (1852-1919), who acquired the land for $10 and a painting he had acquired while studying in Europe. Not only is Weir hailed today as the father of American Impressionism for his poetic images, but his generosity toward younger and less fortunate artists won him many admirers around the world.

This privy marked Connecticut Weir National Historic Site Quarter is one of five America the Beautiful Coins that will be issued in 2020 meaning it will be available only for so long. The grade and luster of coins like these will only decline further while they remain in general circulation. Add one to your collection now before it’s too late!

UNIQUE FIRST-EVER PRIVY MARK – The U.S. Mint released a limited mintage of 2020 quarters struck at the West Point Mint directly into circulation that feature a “V75” privy mark to commemorate the 75th anniversary of the end of World War II. This is first time the mint has ever struck quarters with a special privy mark.

GRADED IN STUNNING UNCIRCULATED CONDITION – Your coin has been graded by the Numismatic Guaranty Corporation (NGC) as being in stunning Superb Gem Uncirculated Mint State-67 (MS67) condition.

KEY FIRST RELEASES CERTIFICATION – NGC has certified that your America the Beautiful Quarter is a First Releases (FR) coin. It will come sealed in an acrylic holder with an exclusive World War II 75th Anniversary Victory Day label.