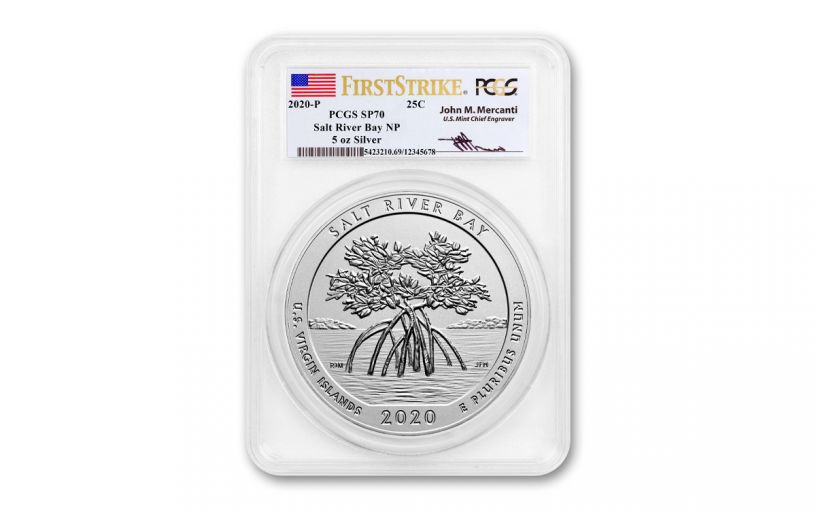 Availability: Out of Stock
This item is currently Out of Stock. Please sign up to be notified if this product becomes available.
Item #
366556
Add to Wish List Add to Wish List Wishlist is for registered customers. Please login or create an account to continue. Add to Compare

Endangered Mangrove Tree Grows on this America the Beautiful Coin

The U.S. Mint’s celebrated America the Beautiful Quarters® series continues its epic run in 2020 with the release of the Salt River Bay National Historical Park and Ecological Preserve Quarter struck as a gigantic coin in five ounces of highly pure 99.9% silver! Measuring an incredible 76.2 mm in diameter, this coin is nearly twice the size of an American Silver Eagle!

The America the Beautiful series has proven extremely popular since it began back in 2010. For those who have been collecting from the start, each release has provided a new and exciting way to discover and appreciate all that America has to offer. The Salt River Bay National Historical Park and Ecological Preserve in the U.S. Virgin Islands is a perfect example of a coin that presents collectors with a scene of America’s beauty that would likely be overlooked otherwise. It depicts a red mangrove tree in the early stages of its life cycle. The design is meant to raise awareness to the park’s endangered mangrove forests.

In addition to its size and silver content, this coin is remarkable for its stunning Specimen finish. The smooth satin-like matte finish was produced by a post-strike vapor-blast process. The method is similar to sand blasting but instead of using compressed air, the U.S. Mint utilizes special automated equipment and a compressed mixture of water vapor and ceramic media to produce the unique matte finish.

In fact, each coin available in this offer has been graded by the Professional Coin Grading Service (PCGS) as being in flawless Specimen-70 (SP70) condition, a distinction that means these perfectly-graded coins have ZERO imperfections — showing all features and fields exactly as the engraver and mint intended. In addition, PCGS has also certified that these coins are First Strike (FS) coins, a designation that means they were received by PCGS or a PCGS-approved depository within the first 30 days of their release.

To top it off, these coins will be sonically sealed in acrylic holders and encapsulated with labels personally signed by the legendary John M. Mercanti, the U.S. Mint’s 12th Chief Engraver! A giant in the numismatic world, Mercanti has produced more coin and medal designs than any person in U.S. Mint history!

The Salt River Bay National Historical Park and Ecological Preserve is a living museum on St. Croix, U.S. Virgin Islands. It possesses an archeological and historical heritage more than 2,000 years old that exists within a dynamic ecosystem, which supports threatened and endangered species. Within the park is the site where Christopher Columbus landed during his second voyage in 1493, where the first documented encounter between Europeans and Native Americans occurred. In 1992, Congress created Salt River Bay as part of the National Park System to preserve, protect, and tell the story of its rich contributions to the nation’s natural and cultural heritage.

This Five Ounce Silver Salt River Bay National Historical Park and Ecological Preserve release is one of five America the Beautiful Coins that will be issued in 2020 and will be available for only so long. Secure one for yourself before it’s too late!