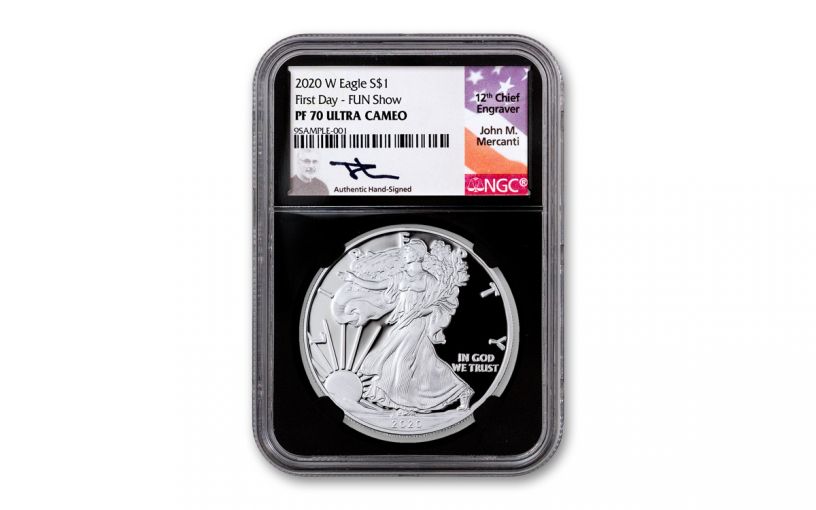 Availability: Out of Stock
This item is currently Out of Stock. Please sign up to be notified if this product becomes available.
Item #
358723
Add to Wish List Add to Wish List Wishlist is for registered customers. Please login or create an account to continue. Add to Compare

A Flawless 2020 Silver Eagle That You’re Sure to Have FUN With!

There was plenty to see at the Florida United Numismatists (FUN) Show held January 9-12, 2020 in Orlando, Florida. With hundreds of coin dealers, live auctions, exhibitors and more than 10,000 people in attendance, the 64th Annual FUN Show literally kicked off the new year for avid coin and stamp collectors.

One of the highlights of the show was a special release of 2020 American Silver Eagle Proofs struck at the West Point Mint. These are among the first Silver Eagles released in 2020 and are highly coveted by collectors. But, if you were unable to attend the FUN Show, you had no chance at getting one of these fabulous coins. But now you DO have the opportunity to obtain one of these gleaming silver treasures. Thanks to our standing in the coin world, we were able to secure an allotment of these coins and we’re making them available to our customers on a first-come, first-served basis!

And what spectacular coins they are! Not only is each 2020-W American Silver Eagle available in this offer struck in an ounce of highly pure 99.9% silver, but each and every one has been graded by the Numismatic Guaranty Corporation (NGC) as being in flawless Proof-70 (PF70) condition, a distinction that means these perfectly-graded proofs have ZERO imperfections – showing all features and fields exactly as the engraver and mint intended. And, of course, each will also come encapsulated in an acrylic holder with a black display core and an exclusive label that attests to its sought-after FUN Show pedigree.

What’s more, NGC has further certified that these Silver Eagles are First Day of Issue (FDI) coins, a designation that means they were received by NGC or an NGC-approved depository by the release date or on the business day within 24 hours of the official release date. Collectors seek out these coins because they are produced with new dies and have sharper strikes and deeper mirrors than those that are struck later. Also, the population of coins labeled as an FDI release is only a fraction of the total mintage.

As an added feature to this offering, each 2020-W FUN Show American Silver Eagle offered here also includes the signature of John Mercanti, the U.S. Mint’s former Chief engraver and designer of the coin’s reverse! A giant in the numismatic world, Mercanti has produced more coin and medal designs than any person in U.S. Mint history!

There’s no time like the present to put a little “Fun” in your collection – and what could be more FUN than these Silver Eagles? Click one to your cart no before our limited supply runs out!

Don’t miss your chance to secure one of these special FUN Show 2020-W Silver Eagles in perfect Proof-70 First Day of Issue condition signed by John Mercanti. These will not last long so order yours today!