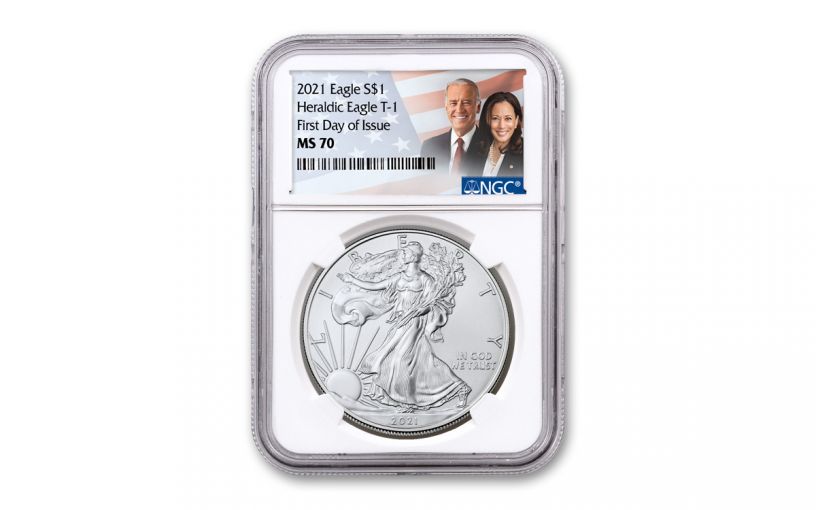 Availability: In Stock
This item will ship within 2 business days.
Item #
407803

What makes these 2021-dated coins so significant is that they will the final Silver Eagles to feature John Mercanti’s Heraldic Eagles design that appears on the reverse. The U.S. Mint had announced that 2020 would be the last year to feature the design, but in the fall it confirmed that it would begin its production run of 2021 dated Brilliant Uncirculated bullion Silver Eagles with John Mercanti’s original reverse design, and complete the 2021 run with the new reverse design. It represents a monumental year for the Silver Eagle Series with a first and a last in the same year of the Mint’s most popular coin!

Plus, each 2021 American Silver Eagles available here has been graded by the Numismatic Guaranty Corporation (NGC) as being in flawless Uncirculated Mint State-70 (MS70) condition, a distinction that means these perfectly-graded coins have ZERO imperfections — showing all features and fields exactly as the engraver and mint intended. In addition, NGC has also certified that these Silver Eagles are First Day of Issue (FDI) coins, a designation that means they were received by NGC or an NGC-approved depository by the release date or on the business day within 24 hours of the official release date. Collectors seek out these coins because they are produced with new dies and considered to have sharper strikes and deeper mirrors than those that are struck later. Also, the population of coins labeled First Day of Issue is only a fraction of the total mintage. Each coin will come sonically sealed in an acrylic holder with a special label featuring a portrait of Joe Biden and Kamala Harris.

Silver Eagles like these are perennial favorites, usually flying out of our vaults as soon as they arrive! Whether you’re new to the series, a diehard collector or a silver stacker looking to add to your reserve, this is your chance to secure these 2021 Silver Eagles for your very own. Don’t wait — order yours today!