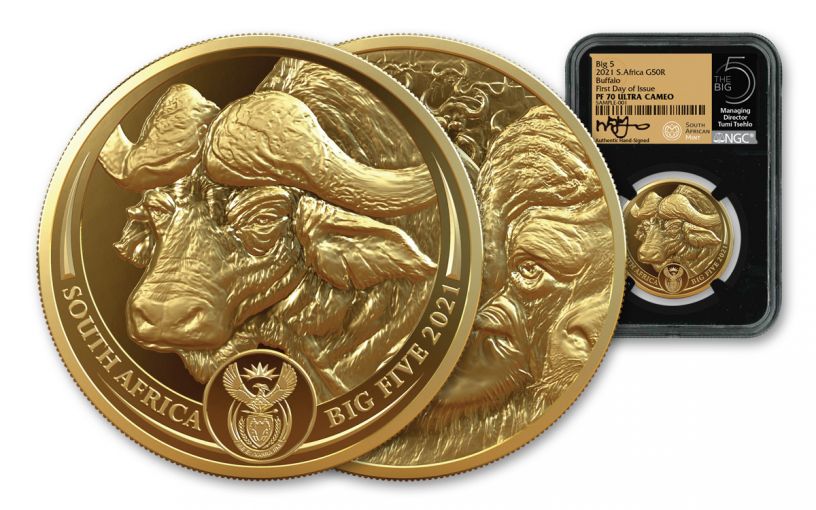 Availability: Call-In Only
This item is only available on a Call-In basis. Please call 1-800-510-6468 to speak to a representative.
Item #
408963
Add to Wish List Add to Wish List Wishlist is for registered customers. Please login or create an account to continue. Add to Compare
Recommended Products
Product Description

Some of the world’s most dangerous wild animals live in Africa. Not long ago the highest mark a sportsman could attain was being able to hunt down “The Big Five” animals on the continent — the Elephant, Lion, Black Rhinoceros, Buffalo and Cape Buffalo. Each animal was quite capable of killing humans, and they often did — even the herbivores! Now you can hunt down these beasts without ever leaving the comfort of your easy chair thanks to the South African Mint’s release of a new series of coins dedicated to these animals.

The fifth and final release in series is this ornery an ill-tempered Water Buffalo struck in one Troy ounce of highly pure 99.99% gold by the prestigious South African Mint — the same mint that brings us the iconic gold and silver Krugerrands. It’s also the same mint responsible for the immensely popular Natura series that began in the 1990s and featured the same Big 5 animals.

The obverse of this legal-tender 50-Rand coin depicts a close-up image of a water buffalo — one of Africa’s most dangerous animals. In fact, it’s believed more big game hunters have been killed by Africa’s Cape Buffalo than any other animal on the continent. The statistics back it up, too, with more than 200 people killed every year by these gargantuan beasts. The coin’s reverse features a unique bisected image of a Buffalo’s profile. When multiple coins are placed side by side it creates a complete close-up portrait of a Buffalo staring straight into your eyes. If you dare, put on some thin white gloves and trace your fingers across the rugged design… it almost feels like you’re caressing the thick fur of a real buffalo!

Your 2021 South Africa One-Ounce Gold Big 5 Buffalo has been graded by the Numismatic Guaranty Corporation (NGC) as being in flawless Proof-70 Ultra Cameo (PF70UC) condition, a distinction that means your perfectly-graded proof will have ZERO imperfections — showing all features and fields exactly as the engraver and mint intended. In addition, NGC has certified your proof to be a First Day of Issue (FDI) coin, meaning it was received by NGC or an NGC-approved depository by the release date or on the business day within 24 hours of the official release date. What makes this coin even more special is that it will come sonically sealed in an acrylic holder with a black display core and encapsulated with a special “Big 5” label that has been personally signed by South African Mint Director Tumi Tsehlo!

With an extremely low limited edition of just 600, only a few select collectors will even get the opportunity to own one of these coins! A century ago, people like Teddy Roosevelt would have donned a pith helmet and tracked down these animals as prizes for their trophy rooms. Today, people go on safari expeditions in hopes of simply catching a glimpse of these often-endangered animals. Avoid the heat and take pride in bagging one of these coins from the comfort of your home simply by clicking it to your cart today!

Don’t let this big, fast and formidable member of the Big 5 animals out of your sights; bag your 2021 South Africa One-Ounce Gold Big 5 Buffalo now before these coins escape into the hands of other collectors!