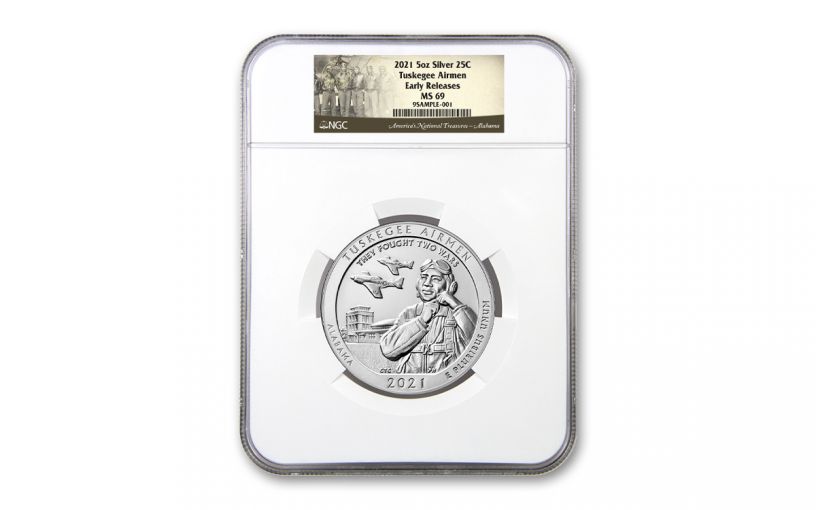 Availability: In Stock
This item will ship within 2 business days.
Item #
409498
CC Payments as low as
$117.50 / month
Add to Wish List Add to Wish List Wishlist is for registered customers. Please login or create an account to continue. Add to Compare

The U.S. Mint’s celebrated America the Beautiful Quarters® series completes its epic run in 2021 with the release of the Tuskegee Airmen National Historic Site Quarter struck as a gigantic coin in five ounces of highly pure 99.9% silver! Measuring an incredible 76.2 mm in diameter, this coin is nearly twice the size of an American Silver Eagle!

A Scene of Heroism from World War II

The America the Beautiful series has proven extremely popular since it began back in 2010. For those who have been collecting from the start, each release has provided a new and exciting way to discover and appreciate all that America has to offer. The Tuskegee Airmen National Historic Site in Alabama is a perfect example of a coin that presents collectors with a scene of America’s beauty that would likely be overlooked otherwise. It depicts a young African-American pilot fastening his headgear with the Moton Field control tower in the background while two P-51 Mustangs roar above. One inscription reads, “THEY FOUGHT TWO WARS” in reference to the dual battles the Tuskegee Airmen fought — fascism abroad and racial discrimination at home.

The Tuskegee Airmen were the first Black military aviators in the United States Army Air Corps. They received their name from where they trained at Alabama’s Tuskegee Army Airfield. They flew more than 15,000 individual sorties in Europe and North Africa during World War II and destroyed more than 260 enemy aircraft and numerous enemy installations. The Airmen were awarded numerous high honors including 150 Distinguished Flying Crosses and 14 Bronze Stars. These heroic airmen were honored in 1998 when the Tuskegee Airmen National Historic Site was established to commemorate the achievements of the famous Tuskegee Airmen.

Your Five-Ounce Silver America the Beautiful Quarter will also come graded by the Numismatic Guaranty Corporation (NGC) in near-perfect Mint State-69 (MS69) condition, a distinction that means your almost-flawless coin will showcase an impressive full strike and indistinguishable imperfections — well above and beyond the quality of the vast majority of coins in the series. In addition, NGC has certified that this is an Early Releases (ER) coin, a designation that means your coin was received by NGC or an NGC-approved depository within the first 30 days of the coin’s release.

Although the America the Beautiful collection is considered bullion, its five releases every year mean that each new release is only available for so long, so add this Five Ounce Silver Tuskegee Airmen National Historic Site coin to your collection now before it’s too late!