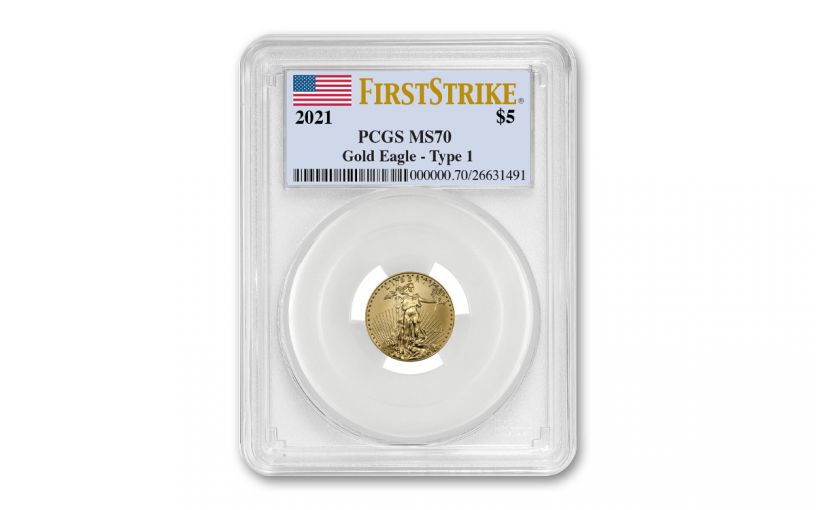 Availability: Out of Stock
This item is currently Out of Stock. Please sign up to be notified if this product becomes available.
Item #
367634

Out of the many things we’ve learned in millennia of human experience, one thing is obvious — gold endures. Whether it’s used in commerce or kept away in vaults, the value and craftsmanship of gold coinage lives from generation to generation. This timeless endurance is why, after South Africa’s Gold Krugerrand was introduced in 1967 and China’s Gold Panda made its debut in 1982, it was absolutely inevitable that the United States would establish its own bullion coin for the ages.

What makes these 2021-dated coins so significant is that they will the final Gold Eagles to feature Miley Busiek’s iconic “Family of Eagles” design that appears on the reverse. The U.S. Mint had announced that 2020 would be the last year to feature the design, but in the fall it confirmed that it would begin its production run of 2021 dated Brilliant Uncirculated bullion Gold Eagles with Miley Busiek’s original reverse design, and complete the 2021 run with the new reverse design. This coin was given a Type-1 pedigree to note that it bears the original Busiek Family of Eagles Reverse design. It represents a monumental year for the Gold Eagles with a first and a last in the same year of one of the Mint’s most popular coin series!

Each 2021 Tenth-Ounce Gold Eagle available here has been graded by the Professional Coin Grading Service (PCGS) as being in flawless Mint State-70 (MS70) condition, a distinction that means these perfectly-graded coins have ZERO imperfections — showing all features and fields exactly as the engraver and mint intended. In addition, PCGS has certified that these Gold Eagles are First Strike (FS) coins, a designation that means they were received by PCGS or an PCGS-approved depository within the first 30 days of its release. Collectors seek out these coins because they are produced with new dies and considered to have sharper strikes and deeper mirrors than those that are struck later. In addition, each will also come sonically sealed in an acrylic holder and encapsulated with a special American Flag label.

Authorized by Congress and signed into law by President Ronald Reagan in 1986, the Gold Eagle Program would quickly establish itself as a global standard for bullion that is artistically rich, perfectly collectible and thoroughly American. Celebrating its 35th anniversary in 2021, the $5 Tenth-Ounce Gold Eagle has returned with its beloved, time-honored design!

The general public can’t purchase 2021 Tenth-Ounce Gold Eagles like these directly from the U.S. Mint. Only approved bullion distributors can buy them directly from the source. Fortunately, GovMint.com is your connection to buy these beautiful bullion coins! But don’t wait too long — this popular series is a perennial hit with collectors and goldbugs alike. Make these Gold Eagles part of your collection today!