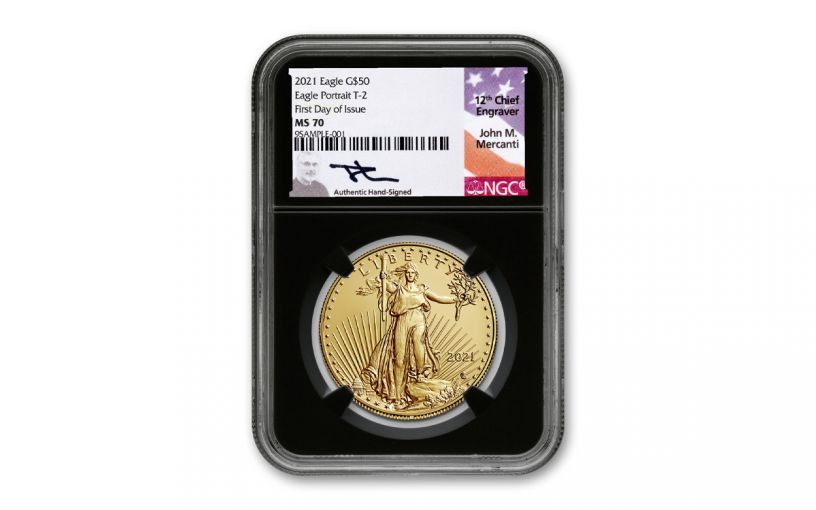 Availability: Call-In Only
This item is only available on a Call-In basis. Please call 1-800-510-6468 to speak to a representative.
Item #
410920
Add to Wish List Add to Wish List Wishlist is for registered customers. Please login or create an account to continue. Add to Compare
Recommended Products
Product Description

Collectors have been waiting with bated breath for more than a year ever since the United States Mint announced that it would be changing the reverse image on its Gold Eagle coin, ending the 35-year run of sculptor Miley Busiek’s popular Family of Eagles design. Many were surprised when the first Gold Eagles released for 2021 still included Busiek’s iconic design. But don’t get your feathers ruffled, because the new design is finally here!

The Face of the New American Gold Eagle

The new Gold Eagle reverse design is the work of Artistic Infusion Program (AIP) artist Jennie Norris and was sculpted by Mint Medallic Artist Renata Gordon. It displays a new “Eagle Portrait” reverse design portraying a realistic, close-up profile of a bald eagle that captures the intricate details of its plumage and its steely gaze. As the second design for 2021, these Gold Eagles coins have been given a Type 2 pedigree to differentiate them from the Type 1 coins that bear the original Busiek Family of Eagles reverse design. It also represents a monumental year for the Gold Eagle Series with both a first AND a last in the same year of one of the Mint’s most popular coins!

Each 2021 Type 2 Gold Eagle available in this offer has been struck in a full ounce of highly pure 91.67% (22 karat) fine gold and is $50 legal tender in the United States. In addition, these 2021 One-Ounce Type 2 Gold Eagles have been graded by the Numismatic Guaranty Corporation (NGC) as being in flawless Mint State-70 (MS70) condition, a distinction that means these perfectly-graded coins have ZERO imperfections — showing all features and fields exactly as the engraver and mint intended.

In addition, NGC has certified that these Gold Eagle are First Day of Issue (FDI) coins, a designation that means they were received by NGC or an NGC-approved depository by the release date or on the business day within 24 hours of the official release date. Collectors seek out these coins because they are produced with new dies and considered to have sharper strikes and deeper mirrors than those that are struck later. Also, the population of coins labeled First Day of Issue is only a fraction of the total mintage.

As a final touch, each coin available here has been sonically sealed in an acrylic holder with a unique black display core and encapsulated with a label personally signed by the legendary John M. Mercanti, the U.S. Mint’s 12th Chief Engraver! A giant in the numismatic world, Mercanti has produced more coin and medal designs than any person in U.S. Mint history!

Combine the Gold Eagle’s elite status among collectors with the fact that this is the first year of the new Type 2 “Eagle Portrait” design and you have a classic recipe for intense demand! Now, you can secure one of these key 2021 One-Ounce Type 2 Gold Eagles! But don’t wait long; we’re expecting them to barely touch down in our vault before an army of collectors swoop in to empty our shelves!

Gold Eagles like these are perennial favorites, usually flying out of our vaults as soon as they arrive! Whether you're new to the series, a diehard collector or a gold bug looking to add to your reserve, this is your chance to secure one of these first-ever 2021 Type 2 Gold Eagles for your very own. Don’t wait — order yours today!