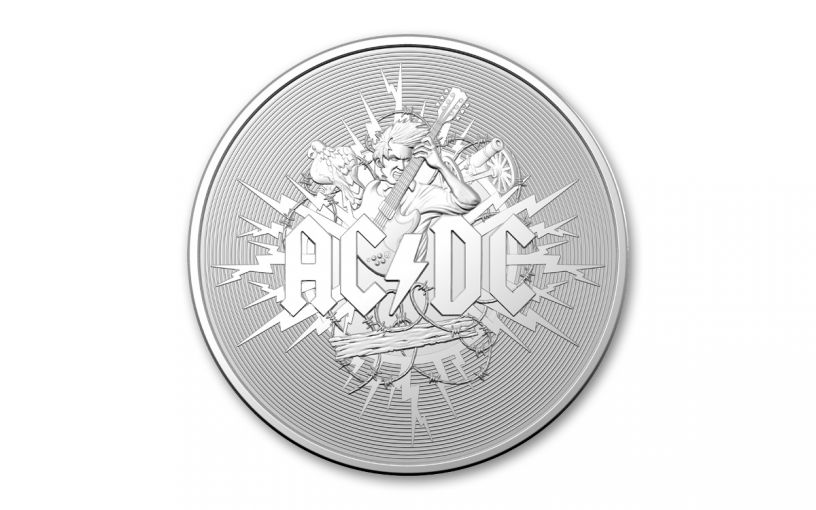 Availability: In Stock
This item will ship within 2 business days.
Item #
367661
Add to Wish List Add to Wish List Wishlist is for registered customers. Please login or create an account to continue. Add to Compare

This Coin Will Shake You All Night Long

Founded in 1973 by 18-year-old guitarist Angus Young and his older brother Malcom, Australian rockers AC/DC went on to become one of the world’s biggest Rock ’n Roll bands, selling more than 200 million records worldwide. With their bone-crushing power cords and blues-fueled songs brimming with humorous sexual innuendo, they’ve stayed at the top of the charts for more than four decades. To pay tribute to 45th Anniversary of their very first album, The Royal Australian Mint has issued a special commemorative coin that captures all the frenetic energy that is AC/DC.

One of Rock Music’s Greatest Guitarists

Struck in a full ounce of highly pure 99.9% silver, this legal tender one-dollar coin features Angus wielding his axe like the guitar wizard he is. In fact, Rolling Stone magazine ranked him as the 24th greatest guitarist of all time. The coin itself is designed to look like a record with grooves circulating around Angus like tracks on a vinyl platter. Angus and the iconic AC/DC logo with the lightning bolt in the center seems to explode off the surface of the coin with streaks of lightning in the background that seem to emanate from the diminutive rock star. And, if you look closely, you can see additional elements in the design that have appeared on the covers of AC/DC albums during their illustrious career, including a parrot from Dirty Deeds Done Dirt Cheap, the cannon from For Those About To Rock (We Salute You), barbed wire from High Voltage and a plank of wood from T.N.T.

The design is further enhanced by the coin’s Frosted Brilliant Uncirculated (BU) finish. Frosted Uncirculated coins — or FRUNC coins — produced at the Royal Australian Mint go through a special process. The background or “field” of the die is finely sand-blasted, and the impression is polished to a bright finish. This creates a contrast that enhances the detail of the actual design. The frosted and polished areas are in reverse to that on a proof coin, so that the image has a polished appearance, and the field is frosted.

Each 2021 One-Ounce Silver AC/DC Coin will also come magnificently displayed in its original government packaging consisting of a numbered presentation case and a Certificate of Authenticity. With AC/DC reunited in 2020 for Power Up — their 17th studio album and first in six years — interest in the band and its epic history has been the subject of fans and musicologists across the world. That means that this coin’s limited edition of just 30,000 seems way too low when one considers how many people would like to own it. Order yours today!

Pay tribute to the long history of rock band AC/DC with the $ 2021 Australia One-Ounce Silver AC/DC Coin. Don’t wait; click it to your cart today!