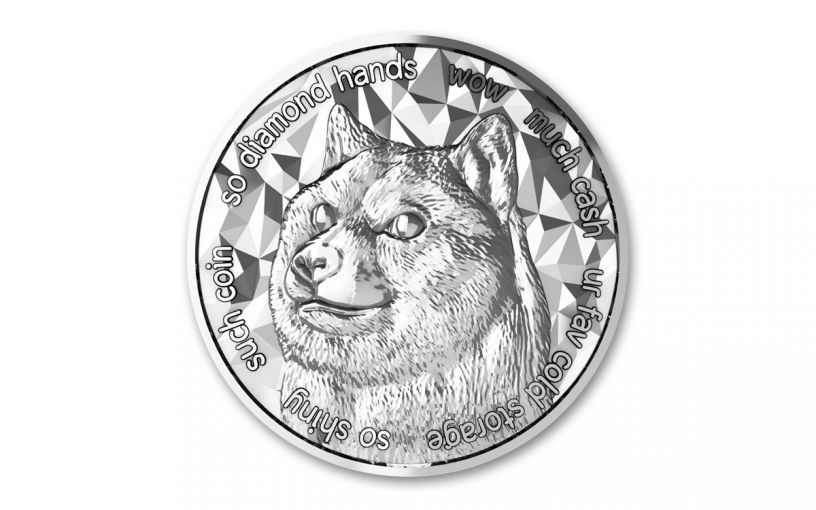 Availability: Out of Stock
This item is currently Out of Stock. Please sign up to be notified if this product becomes available.
Item #
409282

How Much Is That Dogecoin In the Window…?

Did you hear about the guy from San Francisco who couldn’t remember the password to his Bitcoin account? It was an account loaded with around $220 million and the password to access the internet fortune allowed for 10 attempts — and he had already failed on eight tries! Talk about a dilemma! But you don’t have to face that kind of pressure to have fun with cryptocurrency. Thanks to this new release from Singapore’s internationally respected Blockchain Mint, you can own a cryptocurrency commemorative that’s noted for its delightful outlook towards these developing forms of decentralized electronic currency.

Struck in a Troy ounce of highly pure 99.9% fine silver, this commemorative medal pays tribute to Dogecoin, a form of cryptocurrency invented by software engineers Billy Markus and Jackson Palmer, who decided to create a payment system that is instant, fun, and free from traditional banking fees. This form of cryptocurrency is quite popular with many fans. It even has the endorsement of noted cryptocurrency advocate and Tesla billionaire Elon Musk, who, when asked if he thought cryptocurrency exchange broker Coinbase should enable dogecoin transactions, tweeted an emphatic “Yes!” in response to what he has said is his favorite cryptocurrency. By the end of January 2021, Dogecoin had achieved a market capitalization of more than $5.3 billion in U.S. dollars

Dogecoin has a currency symbol of Ð, but when Markus and Palmer developed their cryptocurrency, they decided to give it a mascot in the form of a Japanese Shiba Inu dog, using the “Doge” meme as its logo. The logo features a cute Shiba in a classic pose with its eyebrows raised looking at you with a “side-eye” expression. Shibas are incredibly independent, though they are quite loyal to their owners. They are also known to “scream” when they’re scared or don’t like something — like visiting the vet, taking a bath or getting their nails trimmed!

Rounding out the design is a series of statements regarding the joys and pleasures of owning cryptocurrency: “so shiny,” “such coin,” “so diamond hands,” “wow, “much cash” and “ur fav cold storage.” The background field features a diamond-like texture in a nod to investors. “Diamond hands” is a modern-day colloquialism for an investor who holds cryptocurrency. The commemorative medal’s reverse features a design representing internet mining hardware with the 2021 year date woven into the design.

This non-legal tender commemorative medal comes in original Gem Brilliant Uncirculated (BU) condition, meaning that it is the product of a superb strike that places it firmly among the elite of the run. Previous cryptocurrency commemoratives have been extremely popular among collectors and silver stackers alike. Now you can jump on the bandwagon with this adorable 2021 Blockchain Mint One-Ounce Silver Dogecoin Cryptocurrency Commemorative Medal!

Jump into the world of cryptocurrency with this 2021 Blockchain Mint One-Ounce Silver Dogecoin Cryptocurrency Medal. Click one — or several — to your cart today!