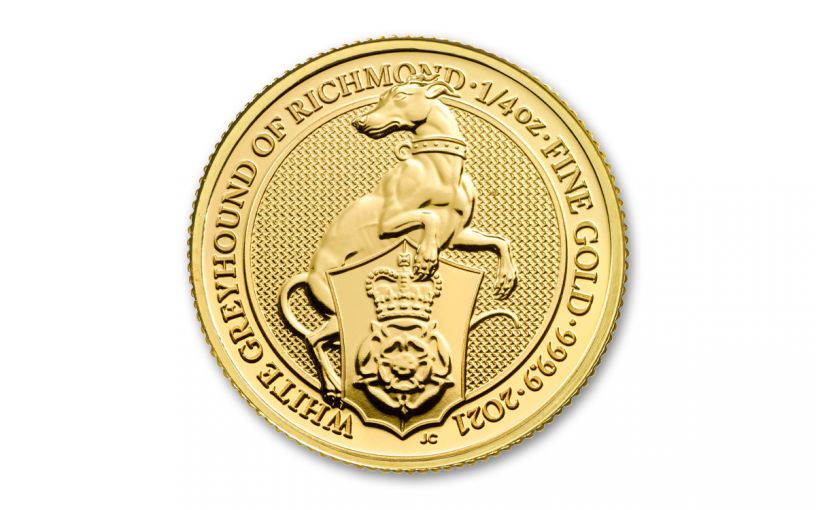 Availability: In Stock
This item will ship within 2 business days.
Item #
366844
CC Payments as low as
$179.69 / month
Add to Wish List Add to Wish List Wishlist is for registered customers. Please login or create an account to continue. Add to Compare

The White Greyhound of Richmond Completes the Queen’s Beasts Series

When Her Majesty Queen Elizabeth II received her crown on June 2, 1953, ten symbolic creatures, each representing a part of her centuries-long royal lineage, stood guard outside the coronation ceremony at Westminster Abbey. One of those six-foot-tall sculptures standing in silent deference was the White Greyhound of Richmond, an honorable creature that is also the latest release in The Royal Mint’s Queen’s Beasts series.

The tenth and final coin in the popular bullion version of the series, this White Greyhound of Richmond coin bears a legal-tender denomination of £25 (twenty five pounds) and is struck in a quarter ounce of 99.99% pure Gold. The symbolic coin depicts the popular canine prancing over a Tudor shield. The shield’s badge, or “livery,” shows a Tudor Rose below a Royal Crown.

This wonderful coin revives that exciting herald in a breathtaking way that is the equal to each entry in the incredibly popular Queen’s Beasts series that has come before it. Plus, each 2021 Great Britain Quarter-Ounce Gold Queen’s Beasts White Greyhound of Richmond Coin available in this offer will come in beautiful Brilliant Uncirculated (BU) condition with razor-sharp details that are as fresh and crisp as the day it left the mint.

Between the expected demand by both coin collectors and gold bugs, we don’t expect our supply to last long. Don’t miss out; reserve this magnificent coin for your collection today!