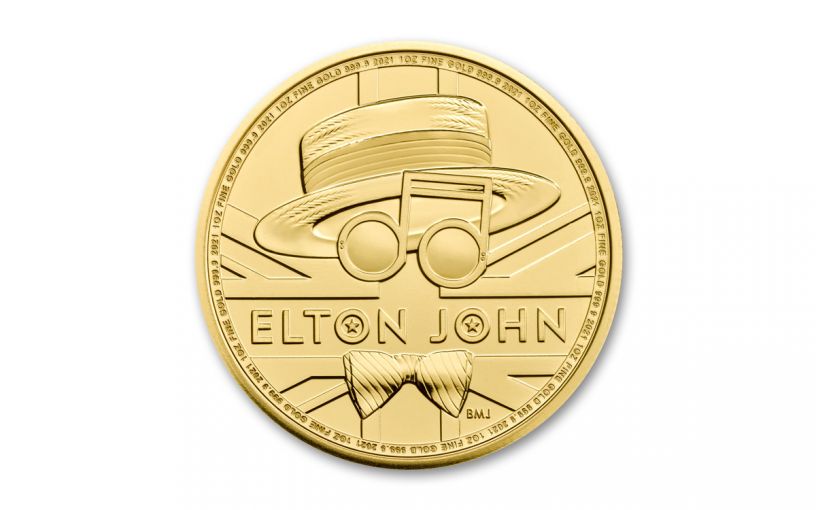 Availability: In Stock
This item will ship within 2 business days.
Item #
367845

With a career spanning nearly 60 years, Elton John is a true living legend in the world of pop music and rock ’n roll. His songs have touched the lives young and old with a mix of soulful ballads, guitar-driven rockers and catchy songs that get people up on their feet and dancing to the beat. He’s conquered stage, screen and the Billboard charts, and now he’s featured on a spectacular coin from Great Britain’s prestigious Royal Mint.

Struck in a full ounce of 99.99% pure gold, the legal-tender £100 (one hundred pounds) coin is the work of artist & digital sculptor Bradley Morgan Johnson, who said he was inspired by Elton John’s “I’m Still Standing” music video, and incorporated the singer’s recognizable hat, sunglasses and bow tie seen in the video into his design. The design really does justice to the legacy and influence of Elton John and was officially approved by the iconic singer himself. In addition, this 2021-dated Great Britain One-Ounce Gold Legends of Music: Elton John Coin comes in original Brilliant Uncirculated (BU) condition with razor-sharp details that are as bright and crisp as the day it left the mint.

From the Music World to the World of Coins

One of the most popular and successful artists in music history, Sir Elton John has sold more than 300 million records and notched 57 Top 40 hits, 27 Top Ten singles and nine No. #1 chart toppers. Born Reginald Kenneth Dwight, Sir Elton is as famous for his flamboyant costumes and showmanship as he is for his remarkable string of hits. Not only has he inspired countless musicians, but his life served as the basis for the 2019 film Rocketman, which earned actor Taron Egerton a Golden Globe award for his dynamic portrayal of Elton. The film also garnered Elton John and his long-time songwriting partner Bernie Taupin an Academy Award for Best Original Song for their “(I’m Gonna) Love Me Again.”

The perfect gift for any fan of Elton John, this coin is sure to be hit. But with a maximum worldwide edition limit of just 2,500 coins, there’s no doubt that this will be one of our top sellers. We expect our supply to vanish quickly; so, don’t wait, click one of these Elton John coins to your cart right now!

Pay tribute to the legacy of one of the world’s greatest music artists with the 2021 Great Britain One-Ounce Gold Legends of Music: Elton John Coin. It also makes a wonderful and thoughtful gift!