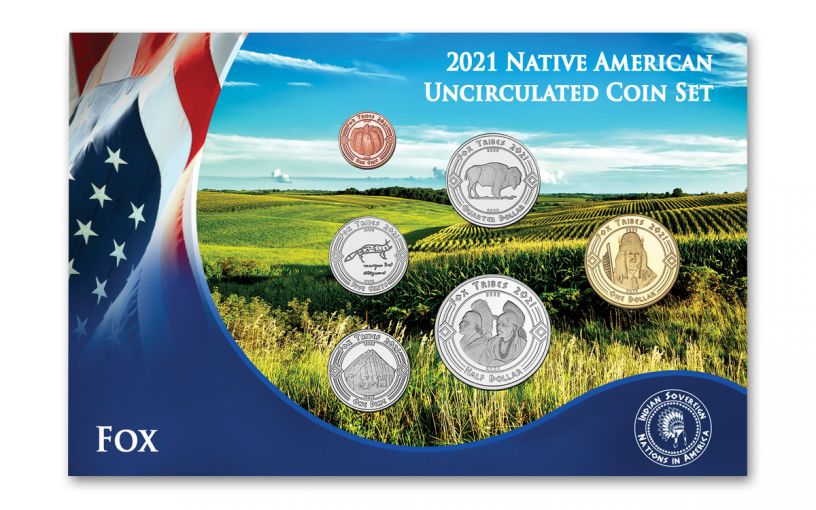 Availability: In Stock
This item will ship within 2 business days.
Item #
367507
Add to Wish List Add to Wish List Wishlist is for registered customers. Please login or create an account to continue. Add to Compare

The Native American Mint’s Uncirculated sets honoring different tribes continues with the 2021 Fox Tribe Set. Also known as the Meskwaki or Mesquakie, the Fox Tribe refer to themselves as Meshkwakihug, or “Red-Earth People,” and first met French Traders in 1667 while living in what is now northwestern Wisconsin. This set of coins presents six different reverse designs featuring images important to the Fox culture.

Long before America was a nation of states, it was a nation of tribes.  The coins are also recognized by the Federal Government as legal tender in each tribal nation as set forth in the Constitution of the United States and from the terms of bilateral treaties that date back to the 18th century.

With a goal of producing accurate cultural depictions of Native American tribes from across North America, the Native American Mint is adding this Fox Tribe Six-Piece Set to its range of Tribal coins. The set contains a one-cent, five-cent, 10-cent, 25-cent, 50-cent and $1 coin. Of particular note is the 50 cent piece, which displays Massika and Wakusasse, Sauk and Fox Tribe members (respectively) representing the tying of their nations together as the Sac and Fox Nation; and Kish-kehosh, a Fox warrior who attended the delegation of Sioux, Fox and Sauk chiefs at the War Department in 1837. The shared obverse displays a skull, representing the Fox Tribe’s extensive death ritual

The 2021 Native American Mint Fox Tribe Six-Piece Set is a stirring one-year-only release that history buffs cannot pass up. Add it to your cart today!