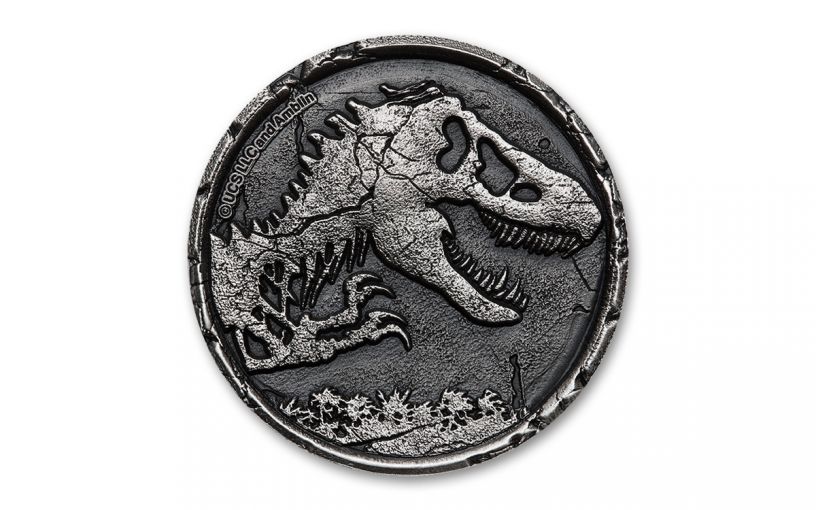 Availability: In Stock
This item will ship within 2 business days.
Item #
368131
CC Payments as low as
$147.50 / month
Add to Wish List Add to Wish List Wishlist is for registered customers. Please login or create an account to continue. Add to Compare

Add a Shot of Dinomania To Your Collection

Dinosaurs have always been popular, especially among children who used their sand boxes to recreate the prehistoric world of these extinct thunder lizards. But “dinomania” really took off following the release of the 1993 film Jurassic Park that brought these terrifying creatures to life. Today, the Jurassic World film franchise has grossed more than $5 billion over the course of five feature films. It’s also spawned several coin releases, including this magnificent coin that features new minting technology that’s sure to appeal to coin collectors and film fans alike.

A Coin That’s Everything it’s Cracked Up to Be

Struck in two full ounces of highly pure 99.9% fine silver, this spectacular coin features the trademark image of the Jurassic Park and Jurassic World films: the fossilized skull of a Tyrannosaurus Rex! This big boy did more than his fair share of damage wreaking havoc on the scientists who attempted to create an amusement park populated with creatures cloned from dinosaur DNA. And, with the next installment in the franchise, Jurassic World: Dominion, slated to hit theaters in 2022, demand for this coin is sure to be intense.

This coin also features several minting techniques that makes it a remarkable offering that you will not want to miss. It starts with a never-before-seen technique that gives it a unique “cracked” appearance, with dents and chips designed to look like a crumbling artifact befitting the theme of the films. Next, it was carefully struck in superb High Relief with a concave field upon the surface of a coin for maximum contrast with the devices. Finally, it was specially treated with a unique antiqued finish. Typically, a hand process, the antique finish not only gives extra depth to the designs, it also means that no two coins are exactly alike. It also means that this extra layer allows you to handle the coin without damaging it.

Released on behalf of Niue, a small island nation in the South Pacific Ocean, this $5 legal-tender coin will come in its original government packaging that consists of a colorful Jurassic World themed box. But you must be quick; just 500 pf these coins have been authorized for worldwide release. Get yours now before our entire allotment becomes extinct!