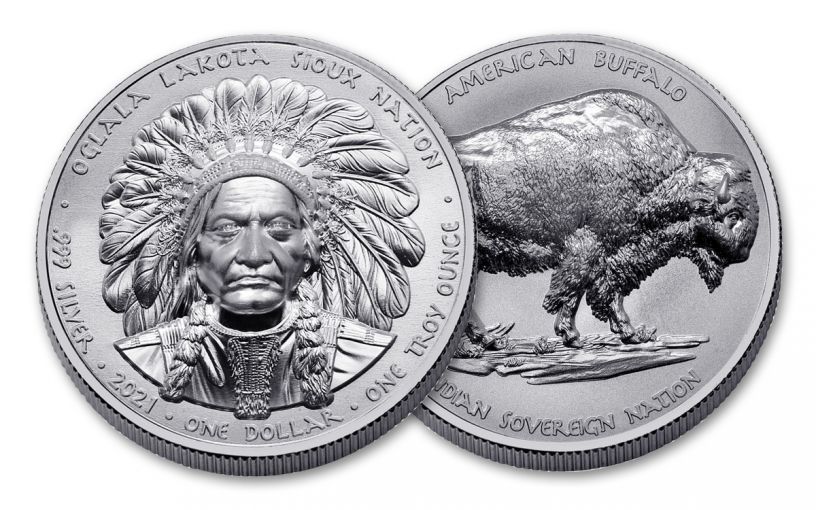 Availability: Available for Order
This item will ship 08/03/21
Item #
364274
Add to Wish List Add to Wish List Wishlist is for registered customers. Please login or create an account to continue. Add to Compare

More than 130 years after his death, Sitting Bull remains as one of the greatest Native Americans who ever lived. A Lakota Sioux holy man from the Hunkpapa band, Sitting Bull bravely resisted the U.S. government’s efforts to take over tribal land in the Black Hills. Thanks to his daunting force of will, a confederation of Lakota, Cheyenne and Arapaho Indians met and defeated U.S. troops at the battles of the Rosebud and the Little Big Horn in the summer of 1876 during the Great Sioux War. Considered to be the chief “Hostile” among the Indians, Sitting Bull was the last to surrender to the authority of the government

Now you can pay tribute to this amazing American with a stunning coin struck in incredible Ultra High Relief (UHR) detail that’s so fantastic you need to see and feel it to believe it! Minted in a full ounce of highly pure 99.9% silver, this coin is $1 legal tender in the Oglala Lakota Sioux Nation of South Dakota, a federally recognized tribe of Native American Indians. It features a dynamic image of Sitting Bull on the obverse in full headdress. The coin’s reverse is equally impressive. It shows an American Bison strolling across the Great Plains in a design reminiscent of America’s classic Buffalo Nickel from a century ago.

Just 2,500 of these rugged-looking coins have been issued for worldwide release and each piece available here comes in original Brilliant Uncirculated (BU) condition. Plus, each coin will arrive in a protective capsule and accompanied by a Certificate of Authenticity. If you’re a fan of America’s Wild West or know someone who is, than this is the perfect coin. Secure one today!