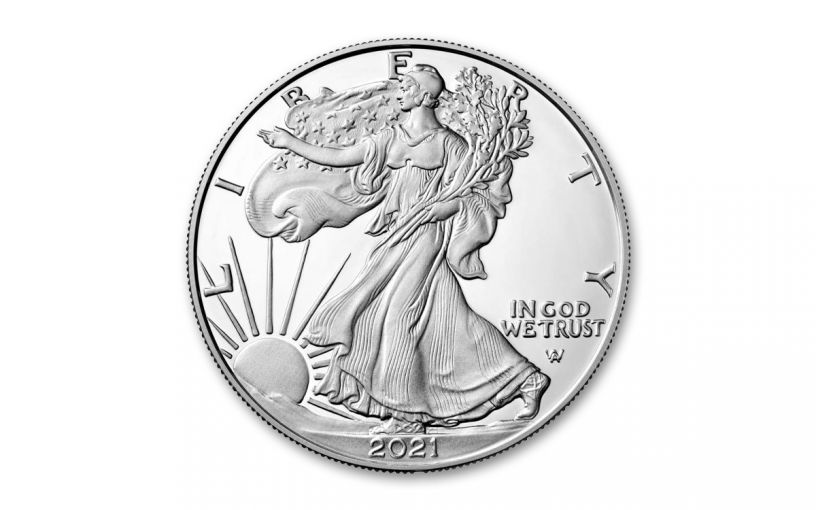 Availability: In Stock
This item will ship within 2 business days.
Item #
411961
Add to Wish List Add to Wish List Wishlist is for registered customers. Please login or create an account to continue. Add to Compare
Recommended Products
Product Description

The Proof version of this spectacular coin has always featured razor-sharp details and impressive mirrored finishes. They are struck in the thousands compared to the millions for the bullion editions. And now you can order the 2021 proof version specially struck at the San Francisco Mint. If you’ve already acquired the 2021 Silver Eagle Proof struck at the West Point Mint and want to complete your collection, you’ll want to get one of these coins ASAP due to the fact that they are struck in smaller quantities than their counterparts from West Point. That’s why you’ll need to act fast because who knows how long before these coins disappear into hands of other eager collectors!

This 2021-S Type 2 American Silver Eagle Proof was expertly crafted by the mint from hand-selected planchets, polished dies and multiple strikes to produce beautifully frosted details rising over mirror-like fields! Your proof will also come in its original government packaging straight from the San Francisco Mint!

Silver Eagles like these are perennial favorites, usually flying out of our vaults as soon as they arrive! Whether you're new to the series, a diehard collector or a silver stacker looking to add to your reserve, this is your chance to secure one of these 2021-S Type 2 Proof Silver Eagles your very own. Don’t wait; order yours today!