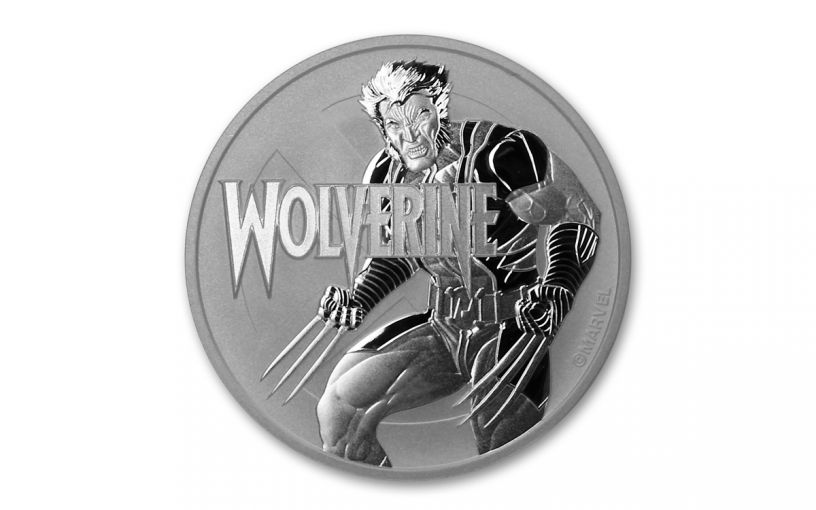 Availability: Available for Order
This item will ship 05/04/21
Item #
369063
Add to Wish List Add to Wish List Wishlist is for registered customers. Please login or create an account to continue. Add to Compare

With his inability to get along with other superheroes, his gruff demeanor and his mutant ability to heal and recover from any injury, James “Logan” Howlett is one of the most unusual superheroes in the Marvel Universe. Better known as Wolverine, Logan can bounce back from any injury save beheading, and uses his retractable adamantium claws to defeat all comers. Now Wolverine and his no-nonsense fury is cutting loose on this brand-new coin minted in a full ounce of gleaming 99.99% silver!

Wolverine Depicted In All His Savage Glory

Struck by Australia’s world-renowned Perth Mint on behalf of the island nation of Tuvalu, this one-dollar legal-tender coin is the ninth release in Tuvalu’s popular Marvel Comics Bullion Series, joining Spider-Man, Thor, Black Panther, Iron Man, Deadpool, Captain America, the Hulk and Venom in a line-up of some of the world’s most popular comic book characters. Wolverine is depicted in all his savage glory with his claws extended ready to mete out punishment.

Each coin available here was struck by Australia’s world-renowned Perth Mint and will come in original Brilliant Uncirculated (BU) condition with razor-sharp details that are as fresh and crisp as the day it left the mint. Plus, each coin will be housed in a protective capsule that will ensure the coin’s pristine condition for many years to come.

One of Marvel’s Most Popular Characters

Created by Roy Thomas, Len Wein, and John Romita Sr; Wolverine debuted in the last panel of The Incredible Hulk #180 published in 1974. In the next issue, the Hulk and Wolverine battle each other before joining forces to defeat the supernatural monster Wendigo. Since then, Wolverine has gained legions of fans as a member of Marvel’s X-Men. His fame rose to even greater heights in a series of X-Men and Wolverine films where he has been superbly played by actor Hugh Jackman no less than ten times. With a mysterious past, a badass attitude, and cool metal claws, Wolverine is one of the most popular characters in the entire Marvel Universe.

Wolverine has thrilled fans for more than 35 years with exciting adventures and knock down brawls with such heroes and villains as the Hulk, Sabretooth, Magneto, Mystique, Apocalypse, Omega Red and Lady Deathstrike. Thanks to Wolverine’s success in comics and film, you can bet fans and silver stackers alike around the world will be clawing to get these coins. With only 50,000 struck for worldwide release, the time to order your coin is now while you still can!

Collectors couldn’t get enough of the previous Marvel bullion coins from the Perth Mint, and we’re expecting Wolverine fans will want to secure one of these coins for their collections. Whether you’re continuing your collection or just starting out; a massive Marvel maniac or a silver stacker looking to bring some action-packed excitement to your bullion, this incredible 2021 Wolverine Bullion Coin is one not to miss!