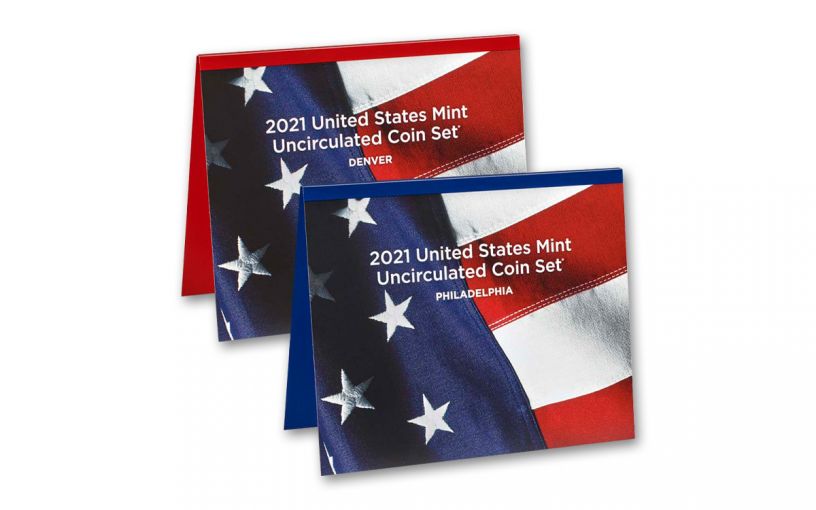 Availability: In Stock
This item will ship within 2 business days.
Item #
423375
Add to Wish List Add to Wish List Wishlist is for registered customers. Please login or create an account to continue. Add to Compare
Recommended Products
Product Description

Each year collectors eagerly wait for the United States Mint to release its Annual Mint Set. Featuring Uncirculated versions of all the nation’s coinage, it’s a fantastic release that is a must-have for those new to the hobby who are just starting to build their collections and for long-time collectors who want to secure each year’s set.

Every Circulating Coin From The Denver & Philadelphia Mints — In UN-Circulated Condition!

The 2021 U.S. Mint Uncirculated Coin Set consists of two folders of seven coins each — one from the U.S. Mint at Philadelphia and the other from the U.S. Mint at Denver. Each folder contains the U.S. Mint’s 2021-dated coins, including the final coin in the America the Beautiful Quarters® Program that pays tribute to the Tuskegee Airmen National Historic Site in Alabama, and the Native American $1 Coin featuring a new one-year-only reverse design dedicated to Native American military service. Also included in the 2021 set is a special General George Washington Crossing the Delaware Quarter featuring a design that shows George Washington commanding his troops through the overnight crossing of the ice-choked Delaware River on the eve of the pivotal Battle of Trenton during the American Revolutionary War.

Besides the unique dollars and quarters, the sets include the Kennedy Half Dollar, Roosevelt Dime, Jefferson Nickel, and Lincoln Penny. The coins in these sets are uncirculated pieces pulled from regular production runs, thus the quality of the individual coins varies widely from set to set and even within a set. Both sets come in original packaging consisting of two blister-style folders. The blue folder contains coins from the Philadelphia Mint, the red folder contains coins from the Denver Mint. Don’t wait, add the 2021 United States Mint Uncirculated Coin Set® to your collection today!

The 2021 U.S. Mint Uncirculated Coin Set is sure to be popular with collectors. Click this year’s Uncirculated Mint Set to your cart right now!