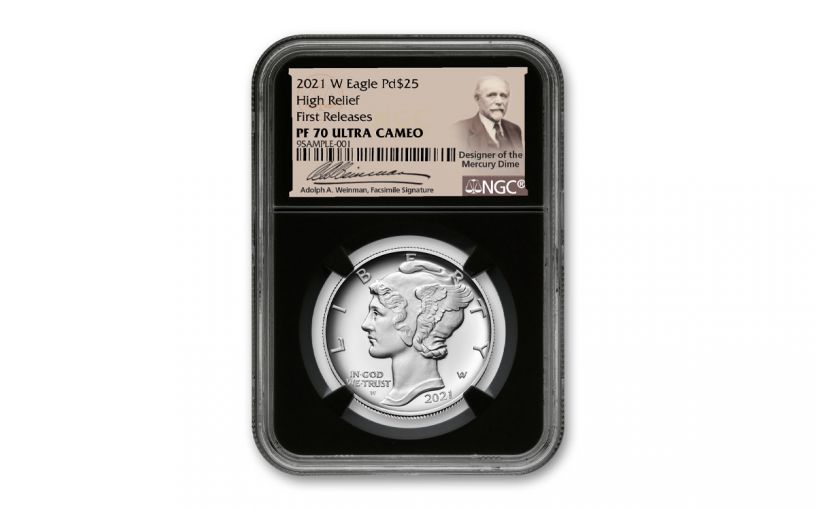 2021 Welcomes The Return Of The Palladium American Eagle Proof!

Ever since 2017 when the Palladium American Eagle joined its gold, silver & platinum brothers to become the United States Mint’s fourth precious metal in its flock of Eagle coins, the response has been nothing short of staggering. Each year’s release has seen collectors clogging The Mint’s website causing sell-outs that can be measured in minutes! additionally, The Mint has alternated the finish for this beautiful coin each year, and for 2021 it is returning to the gorgeous Proof finish. There’s no doubt about it, collectors absolutely love the proof finish that features beautifully frosted details rising over mirror-like fields!

In addition to the exquisite beauty of palladium, these coins were struck in gorgeous High Relief to truly showcase the time-honored designs created more than a century ago by Adolph A. Weinman, a noted sculptor who was also a student of the legendary Augustus Saint-Gaudens.

These One-Ounce Palladium American Eagles were beautifully struck at the West Point Mint and at 34 mm in diameter, the coin is larger than a U.S. Half-Dollar and nearly twice the size of the Mercury Dimes that circulated during the Roaring Twenties, Great Depression and World War II. The larger size vividly showcases these brilliant designs in a way that certainly does them justice. In fact, to make this coin possible, the U.S. Mint worked with the AIA to use the original plaster of the AIA Gold Medal to create the dies for the Palladium Eagle series.

Flawless Proofs From Among The First Released

What’s more, your each 2021-W $25 One-Ounce Palladium American Eagle High Relief Proof available in this offer has been graded by the Numismatic Guaranty Corporation (NGC) as being in flawless Proof-70 (PF70) condition, a distinction that means these perfectly-graded proofs have ZERO imperfections — showing all features and fields exactly as the engraver and mint intended. In addition, NGC has certified that that these proofs are First Releases (FR) coins, a designation that means they were received by NGC or an NGC-approved depository within the first 30 days of their release. Each will also come sonically sealed in an acrylic holder with a black display core and an Adolph Weinman label.

Don’t wait to secure your Uncirculated 2021-W One-Ounce Palladium American Eagle. With an edition of just 12,000, these coins already have anxious collectors around the world eagerly queuing up to own one. Order yours now!

The 2021 American Eagle One-Ounce Palladium Proof is sure to be a hit with collectors so click one — or more — to your cart now while you still can!