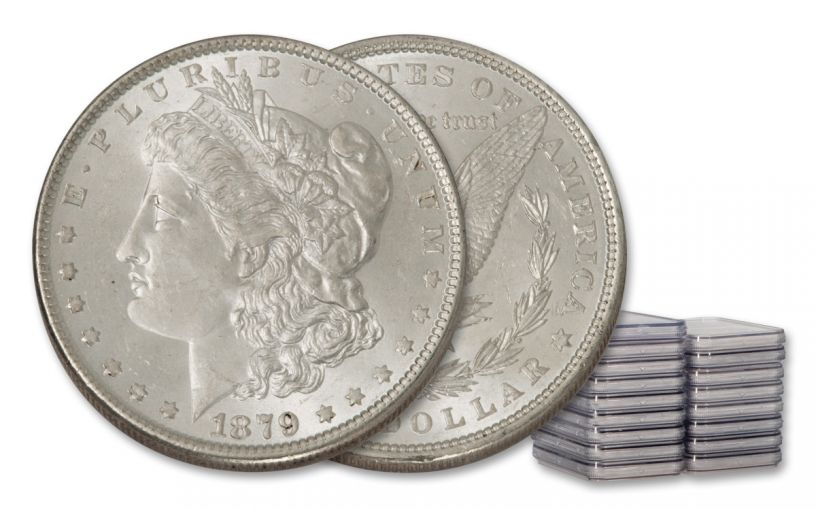 Availability: Call-In Only
This item is only available on a Call-In basis. Please call 1-800-510-6468 to speak to a representative.
Item #
345737
Add to Wish List Add to Wish List Wishlist is for registered customers. Please login or create an account to continue. Add to Compare
Product Description

In the days of the American Wild West, anyone who was anyone had a stash of hefty Morgan Silver Dollars in their saddlebags. These coins helped forge a new future for our nation and helped create legends like Black Bart, the “Gentleman Bandit,” who would rob Wells Fargo stagecoaches of their valuables – including any Morgans they happened to have on hand.

This incredible 20-coin set brings together Morgans from across the coin’s history, starting with a first-year 1878-P 7 Tail Feather variety, struck after the first batch of Morgans were criticized for having eight tail feathers on the eagle reverse instead of the anatomically correct seven. You’ll then journey through history with an unbroken run of Morgans from 1880 to 1890 – including coins struck the year outlaws Billy the Kid and Jesse James were gunned down, the year Buffalo Bill’s Wild West Show began and the year the Census Bureau officially announced the end of the frontier.

This entire collection will come in Brilliant Uncirculated (BU) condition with each coin looking just as it did more than 100 years ago. Each coin will arrive sealed by the Numismatic Guaranty Corporation (NGC) in a protective display holder bearing an exclusive Pittman Act label commemorating the 100th anniversary of the Act of Congress that allowed nearly half of all existing Morgans to be melted down. You’ll also receive a 25-coin row box, a storybook on the U.S. Mint, the book Morgan Dollar by Miles Standish and a genuine piece of ore from the Comstock Lode that made the Morgan Silver Dollar possible.

Only two of these sets are available, so hurry and start your numismatic journey today!