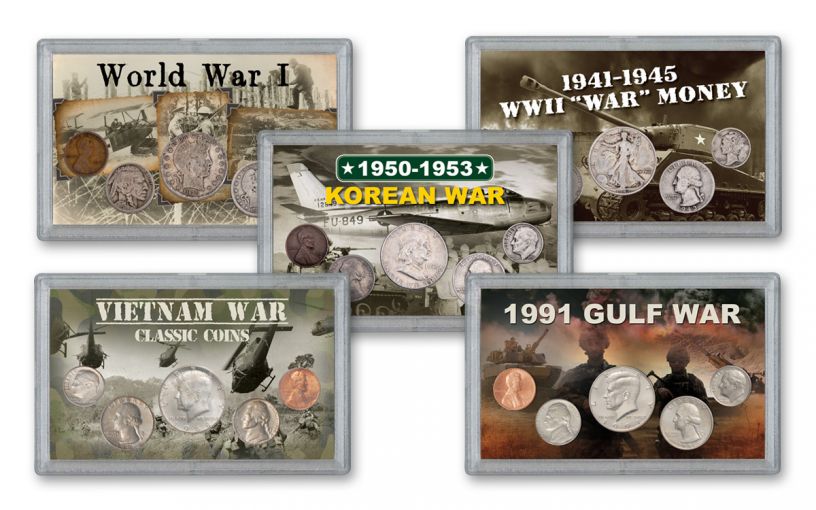 Availability: Out of Stock
This item is currently Out of Stock. Please sign up to be notified if this product becomes available.
Item #
351851
Add to Wish List Add to Wish List Wishlist is for registered customers. Please login or create an account to continue. Add to Compare

World War I… World War II… The Korean War... The Vietnam War... The Gulf War... Each conflict marked an important part of United States history – and all five wars are represented in this massive 25-coin collection.

In this U.S. Wars of the 20th Century 25-Piece Collection, you’ll receive five different custom-designed holders – one for each war – each containing a one-cent, five-cent, 10-cent, 25-cent and 50-cent U.S. coin struck during the time frame in which the United States took part in each war. These are the coins that would have circulated throughout the American home front over the course of 75 years from 1915 to 1991.

These sets include several coins struck in 90% fine silver, as well as coins no longer in circulation, such as the Mercury Dime, Buffalo Nickel and the Walking Liberty & Franklin Half Dollars. In addition, the World War II set includes coins modified for the war effort – a one-year-only Steel Cent struck without copper, and a Jefferson Nickel struck without any nickel. The coins all range in grade from Very Good (VG) to Brilliant Uncirculated (BU) condition.

This is truly an incredible all-encompassing collection that honors the sacrifices made by Americans during the conflicts of the 20th Century. A must-have for U.S. and military history enthusiasts, this set is sure to be appreciated both now and for many years to come!