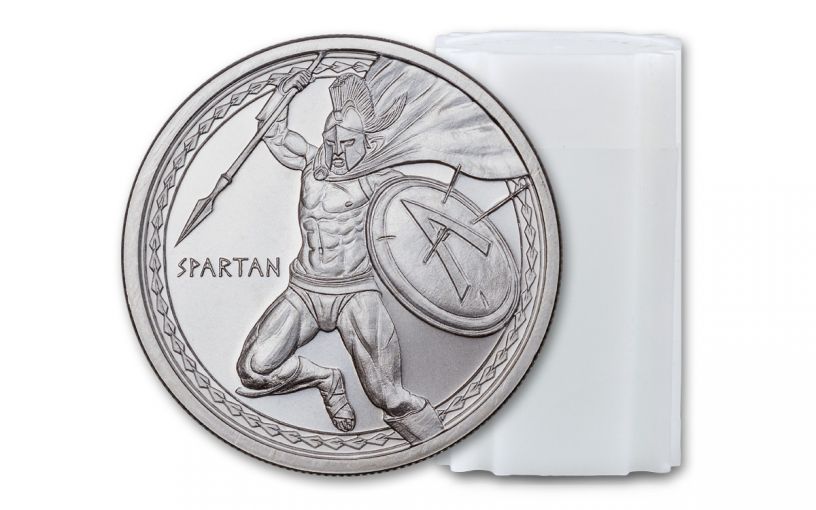 Availability: Out of Stock
This item is currently Out of Stock. Please sign up to be notified if this product becomes available.
Item #
346245

Bred For War, Immortalized in Silver

When it comes to history’s greatest warriors, few can equal the Spartans. For them, war was actually treated like a vacation from the constant training in preparation for war. It should come as no surprise then that the prestigious Golden State Mint selected the Spartans as the first subject in its new Warrior Series of silver rounds.

Struck in one ounce of highly-pure 99.9% silver, each 39 mm piece features a stunning depiction of a Spartan warrior captured in the midst of battle. Shown without his breastplate, the image looks like Spartan King Leonidas at the famous Battle of Thermopylae right out of a scene from the film 300 based on Frank Miller’s epic graphic novel. The Spartan is shown clutching a spear in his right hand with his ever-present shield in his left. He wears the traditional Corinthian helmet and his cape billows behind him in his zeal for combat. The detail is incredible right down to the arrows sticking in his shield adorned by the letter lambda (an inverted “V”) used as a symbol of the Spartan city state.

Sparta didn’t just produce great warriors – its whole culture centered on war at the expense of nearly everything else. The Spartans had little interest in intellectual or artistic pursuits. From birth, boys were prepared mentally and physically for war and their training never stopped. Ever. At the age of 7 they were placed in military boot camps that taught them the art of war. Their enemies and allies both feared them and held them in awe. Upon first sight of the Spartan forces, their wall of shields bristling with lances, enemies swallowed hard and thought twice about giving battle to the inflexible military machine headed towards them.

And it wasn’t just the men. Spartan women were famous for having more freedom than anywhere else in the ancient Greek world. Since they prided themselves on having many children, Spartan women believed they could better perform this job if they remained fit and healthy. Physical training and athletics were as important for girls as they were for boys. Spartan women were educated and could legally own and inherit property. They were allowed and even encouraged to speak on politics. And since the men were almost never home, the women imposed their will on the household with an iron hand.

The Spartans may have lived to fight, but the only fighting you’ll have to do is to click your share of these silver treasures to your cart before legions of history buffs, coin collectors and silver stackers come and take them. Add a 20-piece roll of these One-Ounce Silver Spartans to your collection today!

For centuries, the word “Spartan” has signified fearlessness, discipline and elite fighting skills. Now it also represents this exciting new silver release. Don’t miss out; order your 20-piece roll today and add a whole Spartan army to your collection!