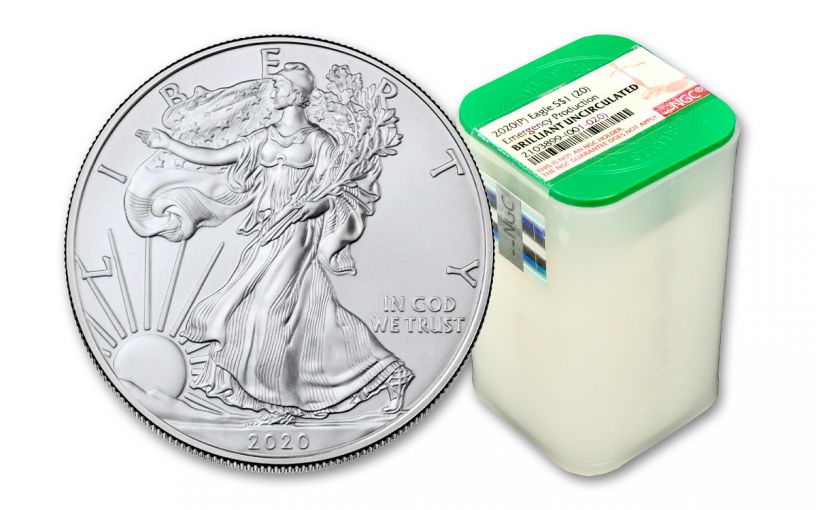 Availability: Out of Stock
This item is currently Out of Stock. Please sign up to be notified if this product becomes available.
Item #
363543
Add to Wish List Add to Wish List Wishlist is for registered customers. Please login or create an account to continue. Add to Compare

As an authorized re-seller of American Silver Eagles, we’ve been able to secure “monster boxes” that differentiate whether the coins were struck at the Philadelphia Mint or the West Point Mint. Then, we sent the coins to the Numismatic Guaranty Corporation (NGC), where they we certified, graded and pedigreed as being “Struck at Philadelphia Mint” and “Emergency Production” issues. Now you can acquire a 20-coin roll of these coins in Brilliant Uncirculated (BU) condition through this amazing opportunity!

SPECIAL EMERGENCY DESIGNATIONS – These coins have been certified by the Numismatic Guaranty Corporation (NGC) and sonically sealed in acrylic holders with labels that have “Struck at Philadelphia Mint” and “Emergency Production” designations.

Don’t miss your chance to get a 20-coin roll of limited-edition Emergency Production Silver Eagles Struck at the Philadelphia Mint. It’s a one-of-a-kind opportunity to secure your own personal hoard of one of the lowest-mintage Silver Eagles ever struck.