Her Majesty The Queen 20-Coin Collection 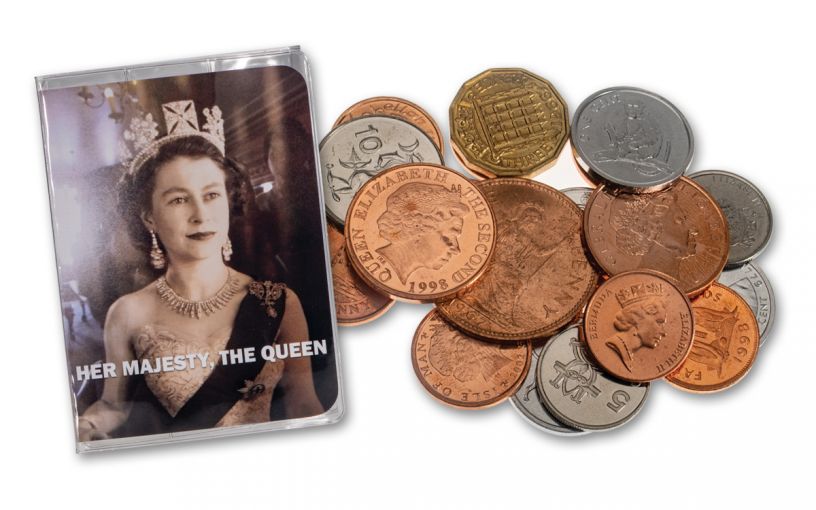 Availability: In Stock
This item will ship within 2 business days.
Item #
350961
Add to Wish List Add to Wish List Wishlist is for registered customers. Please login or create an account to continue. Add to Compare

When she was born, she was known as Elizabeth Alexandra Mary Windsor and was affectionately called “Lilibet” by close family members. Today, her official title is “Elizabeth the Second, by the Grace of God, of the United Kingdom of Great Britain and Northern Ireland and of Her other Realms and Territories Queen, Head of the Commonwealth, Defender of the Faith.”

But you probably know her simply as Queen Elizabeth II.

Queen Elizabeth II is Great Britain’s longest-reigning monarch, as well as its oldest-reigning monarch. Her official dominion also includes a number of other countries – all which strike coins bearing her likeness. This 20-coin collection brings together uncirculated coins from 10 different countries of the Commonwealth, including Canada, the Cook Islands, Fiji, Gibraltar, Great Britain, the Isle of Man, Jersey, the Solomon Islands, Bermuda, and the Falkland Islands. Finding each of these coins – especially in uncirculated condition – would be a difficult task. Not only have we done the work for you, but you’re able to secure this set for less than $1.50 per coin!

The Queen is without a doubt one of the most popular figures in the world despite The Royal Family being constant fodder for gossip columnists and tabloids. She has risen above the rumors and inuendo foisted upon her offspring and their children thanks to a lifetime of dedicated service to her subjects. Dressed in brightly colored overcoats and decorative hats, her vibrant presence is easily spotted when she makes an appearance to one of the more than 600 charities and service organizations that she sponsors. She even stole the show during the opening ceremonies for the 2012 Summer Olympics in London when she made her acting debut in a James Bond spoof that saw her and Agent 007 (Daniel Craig) jump out of a helicopter and parachute into London Stadium!

Not only is this set a terrific way to pay tribute to the world’s most recognizable and popular Royal, but it can also be a great way to introduce kids to the world of collecting foreign currency at an incredible price. Take a trip around the British Commonwealth with Her Majesty The Queen at your side; order your set today!