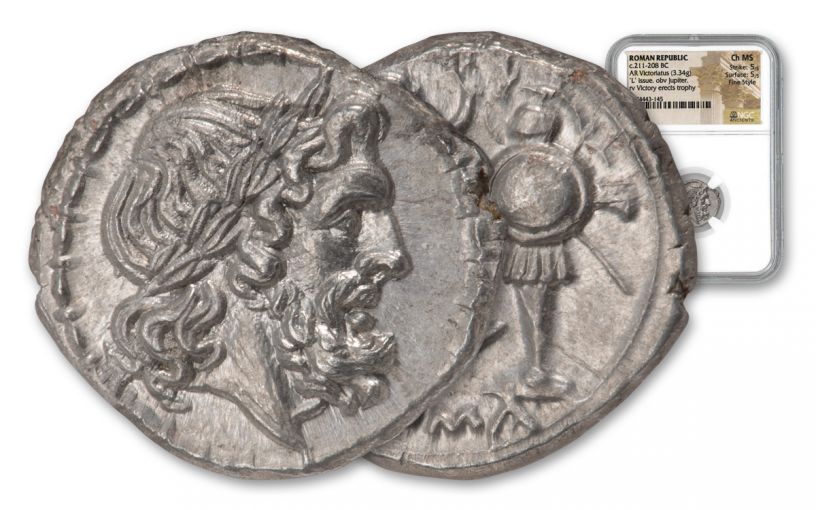 Availability: Call-In Only
This item is only available on a Call-In basis. Please call 1-800-510-6468 to speak to a representative.
Item #
332954
Add to Wish List Add to Wish List Wishlist is for registered customers. Please login or create an account to continue. Add to Compare

In the winter of 208 B.C., the Carthaginian general Hannibal led his army—complete with lumbering war elephants—across the Alps and into Italy. Seizing control of the local area, he would use it as a base of operations from which he would wage war against the Roman Empire for 15 years.

Struck during this Second Punic War, these Victoriatus coins—so named for the image of Winged Victory on the reverse – were the first silver Roman coins to be minted in large quantities. Silver coins had existed before in smaller amounts, but trade with foreign nations was needed to help win this war against Hannibal, and the standard bronze coins used by Romans were too large for international trade. Until 225 BC, silver coins were rare in Ancient Rome, which preferred using large bronze coins for commerce. But when their army came into conflict with the armies of Hannibal, the Romans needed smaller coins -- and lots of them.

These silver Victoriatus coins were minted in order to pay for soldiers and equipment from outside the empire – but they may also have had another purpose: raising morale among the troops and confidence among their allies. The propagandist design of these coins shows Victory crowning a military trophy – a boastful prediction of victories to come, perhaps?

These coins were not only used for trade, but to spread a promise of victory if help was given to the Romans. And in the years that these particular coins were struck – between 211 and 208 B.C. – the war was indeed turning in Rome’s favor. The Roman army seized a large amount of silver when they captured the Greek city of Syracuse in 212 or 211 B.C., and sacked Hannibal’s stronghold of Capua in 211 B.C. These victories allowed for the striking of more silver coinage, and by 203 B.C. Hannibal’s forces were forced to retreat to North Africa.

These Roman Victoriatus coins are a spectacular find – in the last 16 years, only five have come to auction in Mint State condition, and we’ve managed to locate this one graded by the Numismatic Guaranty Corporation (NGC) as being in Choice Mint State (Ch MS) condition. Order now and hold in your hand one of the finest known symbols of Rome’s victory in this famous war that changed the course of history!

This 2,200-year-old Roman Victoriatus silver coin is an ancient coin bursting with history. Coin collectors and history buffs alike would like to own it, so if you want to add one to your collection, you'd better act fast – supplies are extremely limited!