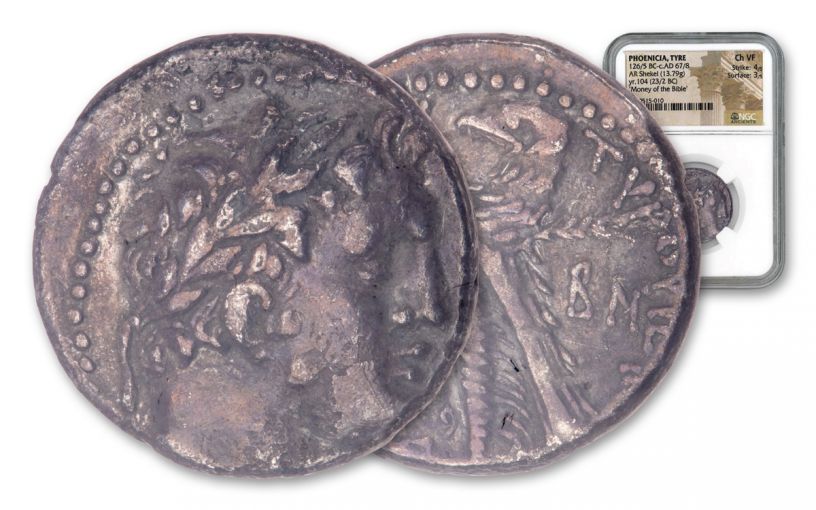 Availability: Out of Stock
This item is currently Out of Stock. Please sign up to be notified if this product becomes available.
Item #
344546
Add to Wish List Add to Wish List Wishlist is for registered customers. Please login or create an account to continue. Add to Compare

The Bible’s Most Famous Coin!

The Shekel of Tyre was the main silver coin used in Judea during the time of the Temple and the New Testament. The coin used for the yearly one-half shekel donation to the Temple, and the infamous “30 pieces of silver” for which Judas betrayed Jesus, are both references to the Silver Shekels of Tyre. Its bold design of the god Melkart – the patron deity of the Phoenician city of Tyre -- dominates the coin’s obverse. The coin’s reverse depicts an eagle perched on the prow of a ship, symbolic of the city’s status as a major port city located on what is today the southwest coast of Lebanon.

Not only is the Shekel of Tyre the most-mentioned coin in the Bible, it is so significant that it is even featured on the cover of Money of the Bible written by noted numismatist and ancient coin expert Kenneth Bressett. This particular coin has been graded by the ancient coin experts at the Numismatic Guaranty Corporation (NGC) as being in remarkable Choice Very Fine (Ch VF) condition. NGC’s experts have also determined that this coin was likely struck in the 104th year of the series, 23/2 BC.

The Silver Shekels of Tyre series was minted for almost two centuries, from the time Tyre gained its independence from the Seleucid Empire in 125 BC until the First Jewish Revolt erupted in AD 67/8, during which the Romans destroyed the Temple in Jerusalem. The coins are meticulously dated with a code using an alpha-numeric system that assigns a number to each letter of the Greek alphabet, beginning with year one as 126/5 BC.

Your coin will be sonically sealed in an acrylic holder with a special NGC grading certification label. In addition, NGC has further graded this coin 4/5 for strike, and 2/5 for surface quality, meaning that the coin will exhibit obvious wear, with some definition of design elements, and flattening on all of the highest points.

Reverse – Eagle on prow to left