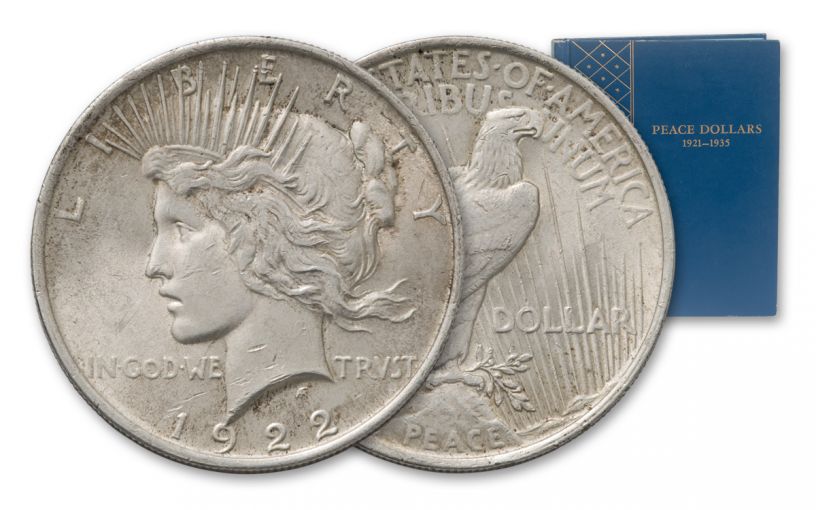 Availability: Out of Stock
This item is currently Out of Stock. Please sign up to be notified if this product becomes available.
Item #
250954
Add to Wish List Add to Wish List Wishlist is for registered customers. Please login or create an account to continue. Add to Compare

First struck in 1921, the Silver Peace Dollar was originally intended to be a one-year-only release to pay tribute to the peace that had finally settled into place at the end of World War I. However, the stunning High Relief design of Liberty proved to be so popular that the United States Mint continued to strike the coin in standard, but no less beautiful, low relief until 1935. This incredible collection brings together all 24 Peace Silver Dollars struck as part of the series!

The last true Silver Dollar series struck in 90% fine silver; the design of the Peace Dollar is iconic — appropriate for such an important coin. Designed by 34-year-old Italian-American sculptor Anthony de Francisci, its obverse features the head of Lady Liberty wearing a crown of rays modeled after the design of the Statue of Liberty. The model for Lady Liberty was 23-year-old Teresa Cafarelli de Francisci, the young sculptor’s wife. Imprinted on the coin’s obverse are “LIBERTY,” “IN GOD WE TRUST,” and the year of issue. The reverse features an eagle at rest clutching an olive branch before a rising sun, along with the inscriptions “UNITED STATES OF AMERICA,” “E PLURIBUS UNUM” and the denomination “ONE DOLLAR.”

Unlike its predecessor, the Morgan Silver Dollar, Peace Dollars were not nearly as prolific, with far fewer releases and just a third the number of total coins released to the public. Many Peace Dollars were also damaged during circulation so finding nice examples of these attractive coins today can be quite difficult.

While every collector enjoys the thrill of the chase, sometimes it’s nice to let someone else do the hunting for you. It’s in that spirit that we present a full set of 90% silver U.S. Peace Dollars, all in Extremely Fine (XF) condition! In this set you’ll receive 24 coins, including the hard-to-find 1928-P, 1934-S and the first-year high-relief 1921-P! Plus, the entire set will come housed in a Dansco album for easy storage and display!

Every date, every mint mark — this is your opportunity to get the complete 1921–1935 Silver Peace Dollar Coin Collection. Add it to your cart today!