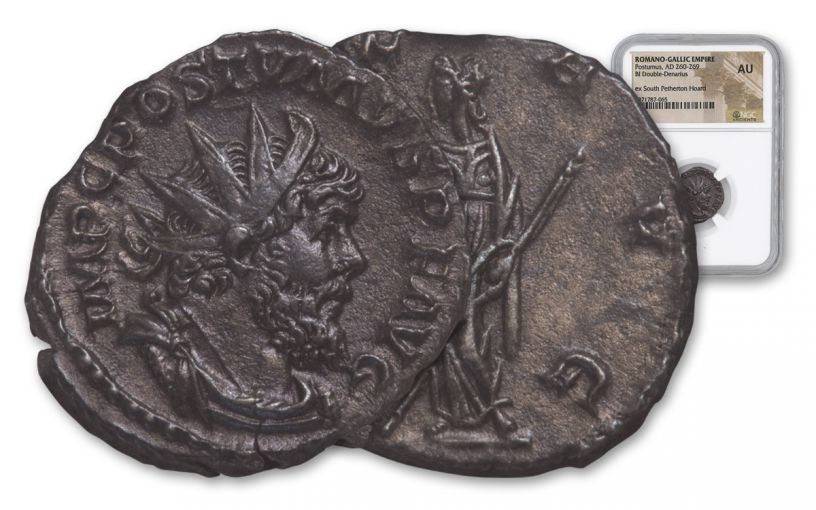 Availability: In Stock
This item will ship within 2 business days.
Item #
313567
CC Payments as low as
$99.98 / month
Add to Wish List Add to Wish List Wishlist is for registered customers. Please login or create an account to continue. Add to Compare

With metal detector in hand and the permission of a local landowner freshly granted, George Hughes set out for adventure on a November morning in 2013. An initial find of a few loose coins slowly developed as more were unearthed nearby. A few hours later, an archeologist was called onto the scene. After four days, one of the most famous hoards in recent history finally saw the light of day – 7,500 coins, all from one of the most turbulent periods in Roman history, all named after the Somerset, England village where they were found: The South Petherton Hoard. Per British law, the coins were examined and curated by the British Museum and then released, which then were sold at auction.

After the death his father, Valarian, Emperor Gallienus put his trusted general, Postumus, in charge of military operations in the west. This was a mistake he would soon regret. In AD 259 Postumus and his troops revolted and ultimately declared him the ruler of the breakaway Gallic Empire – encompassing Gaul, Spain and eventually Britain. In AD 268 Laelianus, Governor of Germania Superior, formed a rebellion against Postumus, but Laelianus’ forces were quickly destroyed. After the battle Postumus refused to allow his troops to plunder Moguntiacum, present day Mainz, Germany, which led to his assassination by disgruntled troops.

While you can find many ancient coins on the market, very few can be found in this superior condition and grade. These are truly museum quality. Don't miss out – secure your ancient Postumus coin from the famous South Petherton Hoard today.