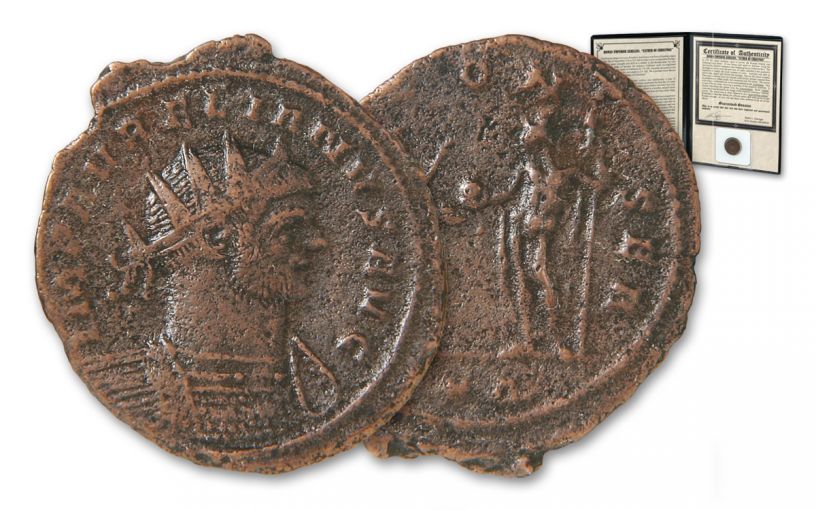 Availability: In Stock
This item will ship within 2 business days.
Item #
320075
Add to Wish List Add to Wish List Wishlist is for registered customers. Please login or create an account to continue. Add to Compare

Who Was “The Father of Christmas?”

In the nearly six years he was in power, Emperor Aurelian reunited the Roman Empire, quelled revolts and turned back invaders. He is also considered the Father of Christmas, as in A.D. 274 he proclaimed December 25th, the date upon which that year’s winter solstice fell, as “Natalis Solis Invicti,” or the festival of the birth of the unconquered sun. Christians of the time were being persecuted, and could not openly celebrate Christian holidays, so they secretly used this date to celebrate the birth of a different kind of “son” – Jesus Christ! Struck sometime during Aurelian’s reign, this ancient bronze coin displays an effigy of “The Father of Christmas” and comes in an album telling the incredible story. Only 146 remain in our vault, so secure yours now!

You can thank Roman Emperor Aurelian – a pagan no less! – for making December 25 Christmas. Learn the fascinating story with this 270-275 Roman “Father of Christmas” Bronze Coin. It’s loaded with detail one wouldn’t expect from a 1,700-year-old coin! Order yours now!