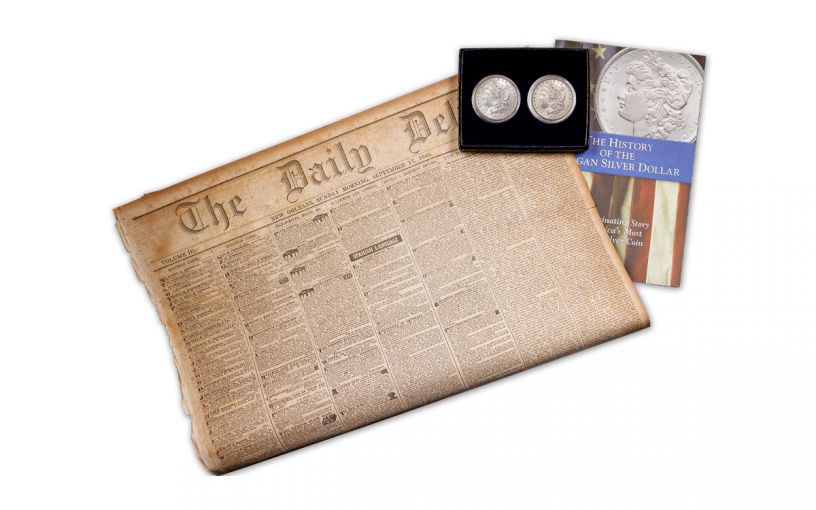 Availability: In Stock
This item will ship within 2 business days.
Item #
409192
CC Payments as low as
$99.50 / month
Add to Wish List Add to Wish List Wishlist is for registered customers. Please login or create an account to continue. Add to Compare

Don’t Get Caught Downriver Without Your “Steamboat Dollars”

The Mississippi River was the nation’s original “superhighway.” During the late 1800s, paddle wheel steamers carrying riverboat gamblers, showgirls, merchants and cargo, moved up and down The Big Muddy from New Orleans to St. Paul. Traveling right along with the passengers were silver dollars like these 1881 & 1882 Morgans struck at the New Orleans Mint.

The New Orleans Mint is the only United States branch mint to have served under three governing bodies: The United States of America, the State of Louisiana and the Confederate States of America. Featuring the instantly recognizable “O” mint mark, New Orleans Mint Morgans in nice condition are coveted by collectors because the coins struck there have a reputation of being of lesser quality than Morgans from other branch mints. That means those graded in Brilliant Uncirculated (BU) condition like the pair available here are valuable and prized because so few of them attained this high grade!

A Snapshot Of New Orleans During the Mid-1800s

Rounding out this three-piece set is a vintage New Orleans Daily Crescent newspaper printed between the 1840s and 1870s. At one time the official journal of the State of Louisiana and the city of New Orleans, the Daily Crescent had been strongly pro-slavery before the Civil War. Following the war, the publication took a more moderate stance in reporting on the social and political implications of a free black population. The newspaper is a literal snapshot of New Orleans during the mid-1800s. It covered such issues as the control of yellow fever, the regulation of prostitution, and the construction of roads, railroads and levees. Dates will vary, but each Daily Crescent newspaper available in this offer is chock full of tidbits on daily life in The Big Easy from more than 140 years ago!

Each coin will come in a round protective numismatic capsule, and the set will be beautifully housed in a deluxe presentation case and accompanied by a Morgan Silver Dollar storybook. Don’t miss out on the chance to own these stunning Brilliant Uncirculated 1881 & 1882 New Orleans Mint Morgan Silver Dollars and a vintage New Orleans newspaper from the 1800s. Add this three-piece set to your collection today!