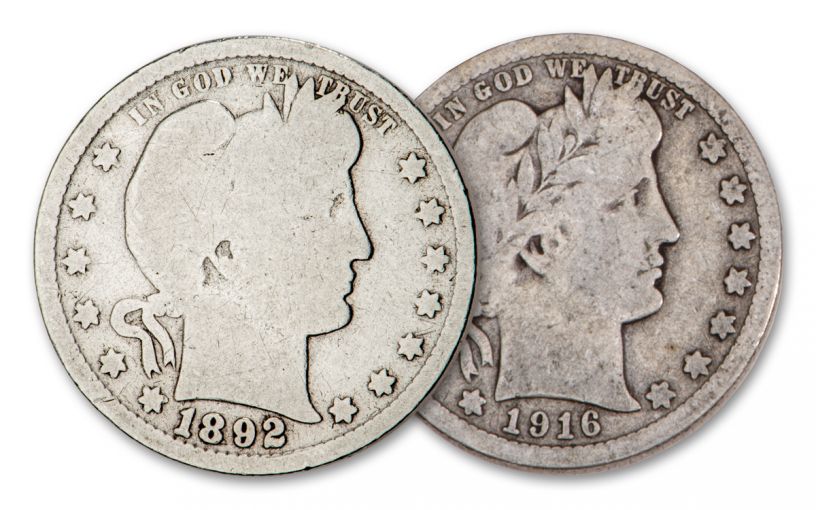 Availability: In Stock
This item will ship within 2 business days.
Item #
357340
Add to Wish List Add to Wish List Wishlist is for registered customers. Please login or create an account to continue. Add to Compare

First-year issues are often the holy grail of any series. For others, securing a last-year issue is the dream. With this attractive set, you get both! This two-coin set includes both the first-year 1892 and last-year 1916 Silver Barber Quarter. These are the coins that jingled in pockets more than 100 years ago and were last struck 16 years before the creation of the first Washington Quarter. Perhaps that’s why so many people don’t even know these coins ever existed!

These coins get their name from their designer, Charles E. Barber, the 6th Chief Engraver at the United States Mint. The obverse features a bust of Lady Liberty with a triple headdress – a cap, a laurel wreath and a tiny coronet inscribed with her name. Struck in 90% fine silver, these coins are a great find. Most circulated heavily and were worn down or melted for their silver content during times of high silver values. Now you can get two key date coins in one terrific set that comes housed in a display box and accompanied by a Certificate of Authenticity. Get this great first-and-last set now!

FAMOUS BARBER DESIGN – This famous coin was designed by Charles E. Barber, the 6th Chief Engraver at the United States Mint. It depicts Miss Liberty wearing a crown made of olive branches with a small headband inscribed with the word LIBERTY. The same design was also used on dime and half dollar coins that circulated at the same time.

STRUCK IN FINE SILVER – Barber Quarters were struck in 6.25 grams of highly pure 90% fine silver and measure 24.3 mm in diameter.

UNITED STATES LEGAL TENDER – Struck from 1892-1916, the Barber Quarter was 25 cents legal tender in the United States and circulated widely throughout the nation up to and during World War I.

Get both ends of one of America’s most historic coin series with this 1892 & 1916 Barber Quarter First & Last Two-Piece Set.