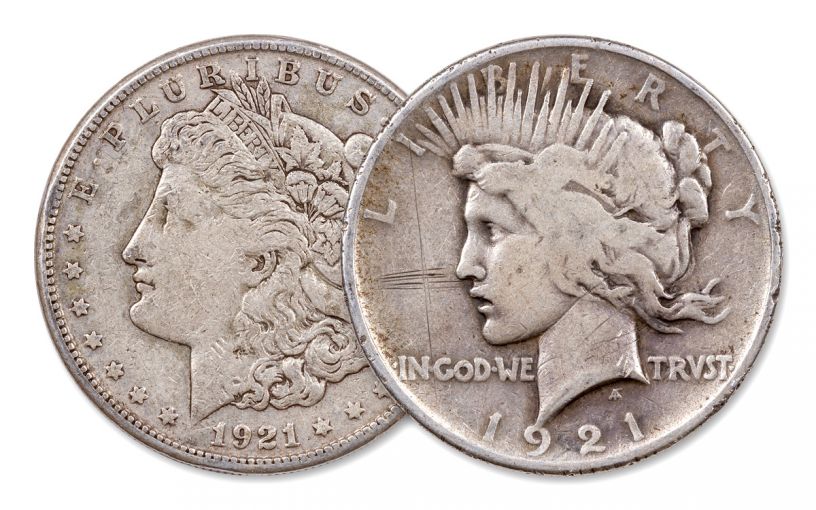 Availability: In Stock
This item will ship within 2 business days.
Item #
407740
CC Payments as low as
$99.98 / month
Add to Wish List Add to Wish List Wishlist is for registered customers. Please login or create an account to continue. Add to Compare

The End And The Beginning: A Classic Morgan And Peace Silver Dollar Combination

The year 1921 is a critical one for savvy silver collectors, as it marked the end and the beginning of two iconic coin series. Since the first Morgan Silver Dollars were minted in 1878, the series skyrocketed in popularity until they were paused in 1904. Then, in 1921, the last Morgan ever minted rolled off the floor at the United States Mint. That same year a new coin series started, the Peace Silver Dollar. Now on the 100th anniversary of this momentous first and last year in American silver dollar history, you get an example of BOTH coins in this historic two-piece set!

Released at the Dawn of the Roaring ’20s

Today, United States silver dollars have taken that popularity to a new level as these coins continue to be highly sought-after — especially key dates such as the first and last year of a coin series’ mintage. This set gives you the best of both worlds! You’ll get the last-year-of-issue 1921 Morgan Silver Dollar paired with the first-year-of-issue 1921 Peace Silver Dollar. Not only is this the first-year Peace Dollar, it’s also an initial “high relief” version of the 1921 Peace Dollars that proved unworkable resulting in allow-relief version being released in 1922. Could these coins have rolled off the presses within days of each other? Who knows, but they were both placed in circulation just as American was entering the Roaring ’20s era of speakeasies, flappers, gangsters and prohibition.

Both coins in this 1921 Silver Morgan & Peace Dollar Two-Peace Set circulated heavily in commerce. The Morgan is in Fine (F) condition and the Peace Dollar is in Good (G) condition. At that time of their release, a dollar could have purchased a meal for two (with a nice tip) at a local diner or a bottle of beer for you and a half dozen of your buddies, or two tickets to a silent movie with enough change left over for snacks.

Two of America’s Most Popular Coins

The Morgan Silver Dollar is one of — if not THE — most collected coin in US history. And, while not as popular as its famous predecessor, the Peace Silver Dollar maintains a sizable and loyal base of collectors who love the short-lived coin’s beauty and its status as America’s last dollar series struck entirely in 90% silver. Today, coin experts believe that only 15% of all Morgans ever struck and 16% of all Peace Dollars remain in existence today!

Each coin in this set will come protected in a clear round numismatic capsule, and the set will be beautifully housed in a presentation case. You’ll also receive storybooks on both the Morgan Dollar and Peace Dollar along with a Certificate of Authenticity. With collectors keyed up about 2021 being the milestone first-and-last 100th anniversary of both coins, securing these key-date coins has become more difficult. Now you can add BOTH historic coins to your collection just by clicking this two-piece set to your cart today!

The last of a storied series and the first of a new one, together as they should be are perfect for any serious silver collection! But quantities are limited, so order yours today.