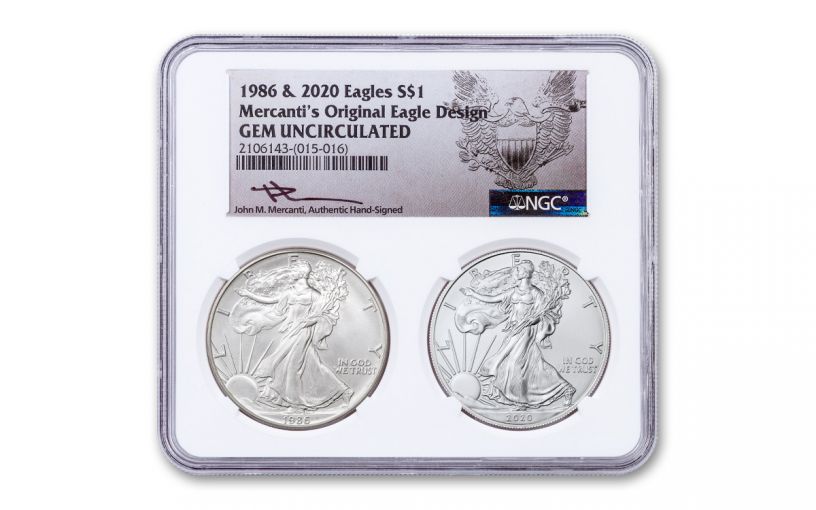 Availability: Out of Stock
This item is currently Out of Stock. Please sign up to be notified if this product becomes available.
Item #
366263
Add to Wish List Add to Wish List Wishlist is for registered customers. Please login or create an account to continue. Add to Compare
Recommended Products
Product Description

The First and Last of an American Classic

From 1986 to 2020 — a span of 35 years — America’s Silver Eagle bore the design of Walking Liberty on the obverse and an Eagle on the reverse, hence the coin’s name. But beginning in 2021, a different eagle design will be used, bringing an end to an era of unparalleled beauty. The new design, a single eagle coming in for a landing, replaces John Mercanti’s beloved design that showcases a heraldic eagle with a shield across its breast.

To mark this incredible event in numismatic history, we’ve put together a first and last set of Silver Eagles—a first ever Silver Eagle released in 1986 and the 2020 edition, the final release in the series to feature Mercanti’s design. Each coin comes certified and graded by the Numismatic Guaranty Corporation (NGC) as being in Gem Brilliant Uncirculated (BU) condition and have been encapsulated together in a special two-coin acrylic holder.

And to really put the icing on the cake of this spectacular offer, the holder contains an exclusive label personally signed by John Mercanti! The U.S. Mint’s now-retired 12th Chief Engraver, Mercanti is an undisputed giant in the numismatic world, a creative genius who has produced more coin and medal designs than any person in U.S. Mint history!

The Silver American Eagle was authorized by Congress in the Liberty Coin Act of 1985. This legislation was conceived and enacted to provide silver enthusiasts with a safe and simple means of purchasing precious metals. First struck in 1986, it has gone on to become one of the world’s most popular coins. Each year the U.S Mint’s annual release of the Silver Eagle is highly anticipated as people scramble to get their share. And with 2020 marking the end of an era, the time to get this special 1986–2020 Silver Eagle Two-Piece Set and its Mercanti Signature is now! Click it to your cart today!

Silver Eagles like these are perennial favorites, usually flying out of our vaults as soon as they arrive! Whether you're new to the series, a diehard collector or a silver stacker looking to add to your reserve, this is your chance to secure a first-and-last type set for your very own. Don't wait — order yours today!