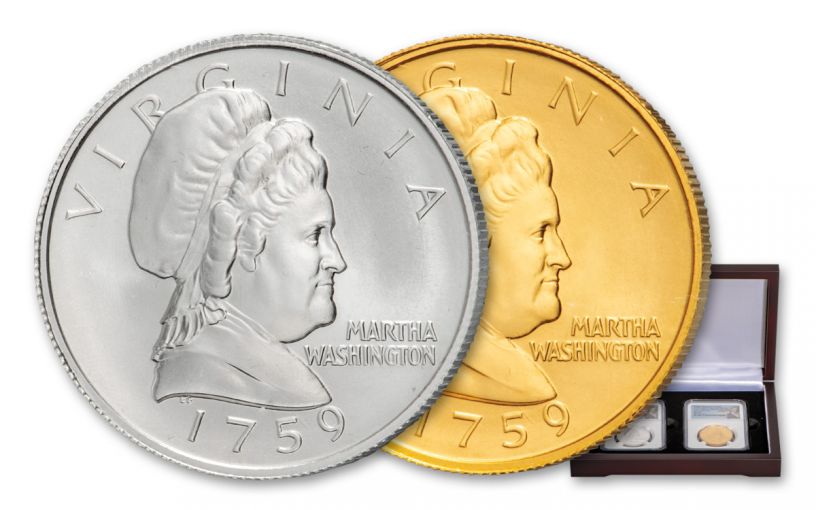 Availability: In Stock
This item will ship within 2 business days.
Item #
358252
CC Payments as low as
$1,123.75 / month
Add to Wish List Add to Wish List Wishlist is for registered customers. Please login or create an account to continue. Add to Compare

Do You Know the Secret of the Martha Washington Half Dollar?

In 1965, 1982 and 1999, the United States Mint created special Martha Washington dies. Designed by Edward R. Grove, creator of the Kennedy Half Dollar, the dies depict an effigy of the “Mother of our Country,” along with a date of 1759 — the year she married General George Washington. Sounds interesting, right? But despite the beautiful design, historic theme and high potential for collector interest, no pieces were ever struck for circulation.

So, if these dies were created and apparently never used, what were they for? It was a mystery that remained a closely guarded secret for decades until a die was discovered in 1999 and made an appearance on the front page of Coin World, arguably the world’s most popular magazine dedicated to news about coins, paper money, medals and tokens.

Here’s how the story got out: These dies existed solely for striking pattern coins. They did not have a legal-tender denomination and were used only to test metal alloys for future coinage. In 1999, the U.S. Mint contracted with four companies to strike test pattern coins with the alloy later used for the Sacajawea Dollar. The dies were so important to the Mint that they were insured for $250,000 when they were shipped to each contractor company. Normally, dies like these are returned to the Mint and “canceled” or destroyed along with the test patterns, but an uncanceled 1999 die wound up in private ownership. This was when the world first learned of the Martha Patterns.

Now, for the first time ever, an authentic Martha Washington Half Dollar die has been used to create a limited number of pieces available to the public. This release also marks the first time a restrike has been created using an uncanceled U.S. Mint obverse die since 1900!

This two-piece set contains patterns struck in one ounce of highly pure 99.9% gold and 20 grams of 99.9% fine silver. Both pieces have been certified by the Numismatic Guaranty Corporation (NGC) as being in flawless Mint State-70 (MS70) condition, a distinction that means your perfectly-graded pieces will have ZERO imperfections — showing all features and fields exactly as the engraver and mint intended.

Mintages are incredible limited, with no more than 100 sets possible — and even fewer in flawless MS70 condition. Secure this “secret” piece of U.S. Mint history today!