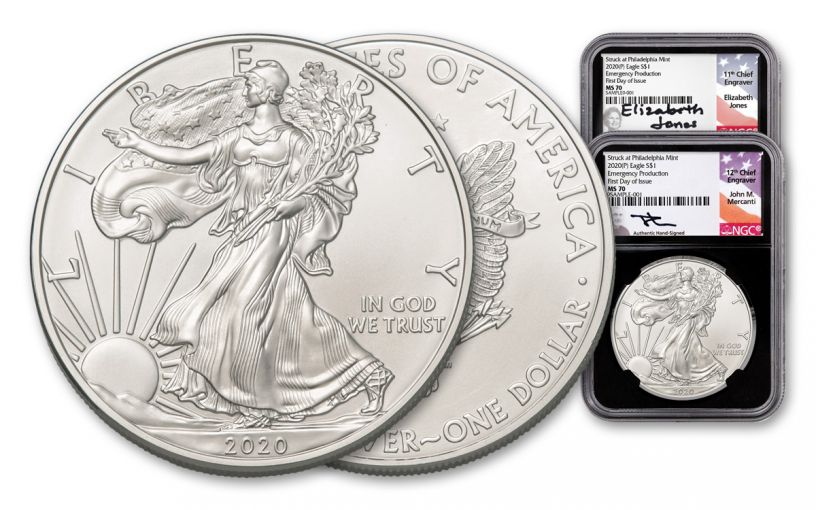 In addition, every bullion Silver Eagle available in this offer has been graded by NGC as being in flawless Mint State-70 (MS70) condition, a distinction that means these perfectly-graded coins will have ZERO imperfections — showing all features and fields exactly as the engraver and mint intended. Plus, NGC has certified that these Silver Eagles are First Day of Issue (FDI) coins, a designation that means they were received by NGC or an NGC-approved depository by the release date or on the business day within 24 hours of the official release date. They will also come sonically sealed in an acrylic coin holder with a special black display core.

As a final addition to this amazing opportunity, we’re making available a pair of coins: one with the identification label signed by John Mercanti and the other with the label signed by Elizabeth Jones. John M. Mercanti was the U.S. Mint’s 12th Chief Engraver! A giant in the numismatic world, Mercanti has produced more coin and medal designs than any person in U.S. Mint history — including the Heraldic Eagle design that appears on the reverse of this coin! Elizabeth Jones was the 11th Chief Engraver of the U.S. Mint! She’s still the only woman ever to serve as the Mint’s chief engraver. Jones was appointed in 1981 by President Ronald Reagan. She served from 1981 to 1990 and oversaw two of the Mint’s most popular coin programs: The Gold and Silver Eagles.

This 2020(P) Silver Eagle Struck At Philadelphia Emergency Production Mercanti/Jones Signed Two-Piece Set will be a key collectible within any Silver Eagle collection. Order yours today and make sure it’s part of yours!

SPECIAL EMERGENCY DESIGNATIONS – These coins will be sonically sealed in acrylic holders with black display cores and special labels that identifies them as “Struck at Philadelphia Mint” and “Emergency Production” issues.

KEY FIRST DAY OF ISSUE CERTIFICATION – NGC has certified that these Silver Eagles are First Day of Issue (FDI) coins, independent authentication that they were released by the mint during the premier day of the series' issue.

Don’t miss your chance to get these limited-edition Emergency Production Silver Eagles Struck at the Philadelphia Mint. It’s a one-of-a-kind opportunity to secure a pair of what is one of the lowest-mintage Silver Eagles ever struck.