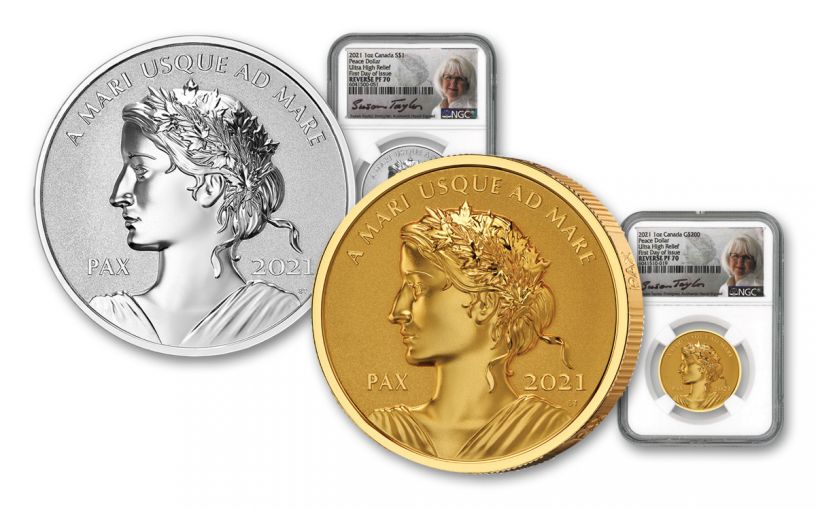 Availability: Call-In Only
This item is only available on a Call-In basis. Please call 1-800-510-6468 to speak to a representative.
Item #
367331
Add to Wish List Add to Wish List Wishlist is for registered customers. Please login or create an account to continue. Add to Compare

In 2021, the prestigious Royal Canadian Mint released its first-ever Peace Dollar — and it sold out in less than five days! Now, for 2021 — the 100th anniversary of the famous United States Peace Dollar — Canada’s own Peace Dollar returns, struck for the very first time in Ultra High Relief Reverse Proof condition! And in this offer, you can get both the gold and silver coins in an outstanding two-piece set!

Crafted by retired Royal Canadian Mint Senior Engraver Susan Taylor – winner of the 2016 American Medal of the Year Award and the designer of the International Art Medal Federation 2018 Congress Medal — the design for these superb coins feature the allegorical “Peace” as she appeared on the Peace & Liberty Medal, where the female personification of Peace is depicted with her hair crowned in a wreath of maple leaves and olive branches that, according to Taylor, symbolize “the core values of peace, order and good government that have come to inherently represent the Canadian identity.”

Struck in a full ounce of 99.99% silver and 99.999% gold, these coins also come minted in Ultra High Relief, so every strand of hair, every maple leaf, and every olive branch crackles with astounding detail. The design itself is based on the poetic statue representing Peace at Canada’s National War Memorial in Ottawa, Ontario. One of the country’s most revered sites, the memorial consists of a large granite arch that rises over a group of 22 World War I-era soldiers in Confederation Square and is topped by two bronze sculptures representing Peace and Liberty.

And, for the first time in the Canada Peace Dollar series, these coins have been struck with a fabulous Reverse Proof finish. The opposite of a regular proof that features frosted details rising over mirror-like fields, these coins were expertly crafted by the mint from hand-selected planchets, polished dies and multiple strikes to produce beautiful mirror-like details rising over frosted fields!

What’s more, your 2021 Canada One-Ounce Gold & Silver Peace Dollars will come graded by the Numismatic Guaranty Corporation (NGC) in flawless Proof-70 (PF70) condition, a distinction that means your perfectly-graded proofs will have ZERO imperfections — showing all features and fields exactly as the engraver and mint intended! In addition, NGC has certified that these proofs are First Day of Issue (FDI) coins, a designation that means they were received by NGC or an NGC-approved depository by the release date or on the business day within 24 hours of the official release date.

As a final touch, your coins will be sonically sealed in acrylic holders with black display cores and encapsulated with labels personally signed by Susan Taylor herself! Each coin will also be accompanied by its original government packaging from the Royal Canadian Mint along with a mint-issued Certificate of Authenticity.

Just 5,000 One-Ounce Silver and only 500 One-Ounce Gold Canadian Peace Dollars were authorized for worldwide release — an amount that seems destined to disappear rather quickly. Don’t let these coins lip through your fingers; grab a “peace” of this limited mintage now before they’re all gone!

Don’t miss your chance to secure Canada’s 2021 Peace Gold & Silver Dollars! Reserve your two-piece set now by clicking one to your cart while they’re still available!