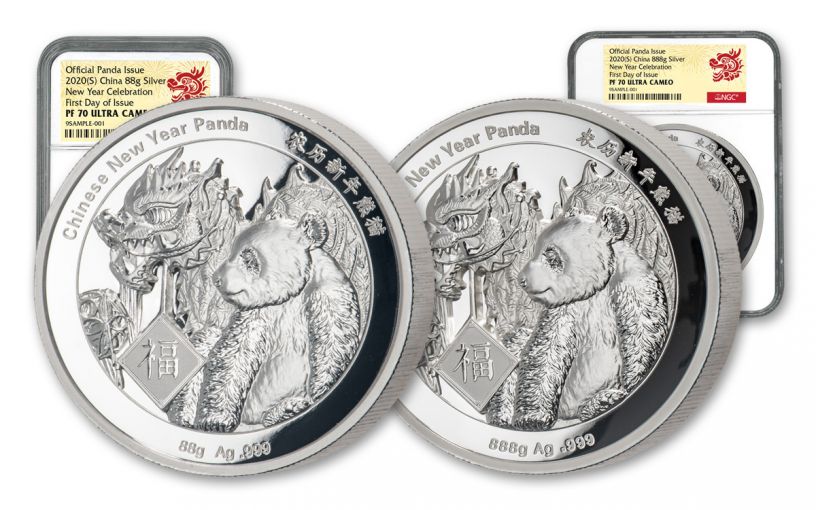 Availability: Call-In Only
This item is only available on a Call-In basis. Please call 1-800-510-6468 to speak to a representative.
Item #
364514
Add to Wish List Add to Wish List Wishlist is for registered customers. Please login or create an account to continue. Add to Compare

There’s an all-new series of Panda Proofs just waiting for you to add it to your collection — one that incorporates some of China’s most popular and revered traditional icons.

The national symbol for China is the Giant Panda. With its adorable black-and-white fur, fat cheeks, big eyes and delightful pigeon-toed way of walking, it’s easy to see why. But long before Panda Bears became embroiled in world politics and conservation efforts, it was the dragon that was seen by the Chinese as the personification of their national identity. Now, both iconic symbols are at the heart of a new series released by the China Mint to celebrate the Chinese Lunar Year.

In this two-piece set, you can get both the series’ 88-gram proof and the massive 888-gram proof — both struck in highly pure 99.9% fine silver. Each is an amazing piece of numismatic artistry that depicts a cuddly panda sitting beside a twisting and turning dragon like one would see during a traditional New Year’s Dragon Dance. To make the design even more emblematic of the new year, it features the Chinse character for “Fu,” a symbol that is associated with peace and prosperity and prominently displayed in homes across China during the new year festivities.

Similar to the incredibly popular Moon Festival Panda™ series, these New Year Celebration Pandas were beautifully struck by the China Mint in gorgeous proof condition, meaning they were expertly crafted from hand-selected planchets, polished dies and multiple strikes to produce beautifully frosted details rising over mirror-like fields. What’s more, each proof was struck in amazing Ultra High Relief with detail so intricate that the designs seem like they’re leaping from the surface!

In fact, each 2020 China New Year Celebration Panda Proof available here has been graded by the Numismatic Guaranty Corporation (NGC) as being in flawless Proof-70 Ultra Cameo (PF70UC) condition, a distinction that means these perfectly-graded proofs will have ZERO imperfections — showing all features and fields exactly as the engraver and mint intended. In addition, NGC has certified that these proofs are First Day of Issue (FDI) releases, meaning they were received by NGC or an NGC-approved depository by the release date or on the business day within 24 hours of the official release date.

Your proofs will come sonically sealed in individual acrylic holders and encapsulated with exclusive dragon labels. They will come displayed in a deluxe presentation case along with a storybook and a numbered Certificate of Authenticity. As an added bonus, they will be accompanied by a Chinese “Luck and Prosperity” note. The note will come in a red envelope — significant since giving gifts is another important facet of Chinese New Year celebration. These gifts often take the form of special red envelopes decorated with calligraphy wishing the recipient good fortune.

The maximum worldwide mintage limit for these pieces has been set at just 888 for the 88-gram proof and only 188 for the 888-gram proof — auspicious numbers as the number “8” is regarded as lucky in Chinese culture. Make sure your luck doesn’t run out — avoid being disappointed later by clicking these fabulous new Panda proofs to your cart now!

Celebrate the 2020 Chinese New Year with these special silver proofs struck in Ultra High Relief! Click this two-piece set to your cart now before our small supply disappears!