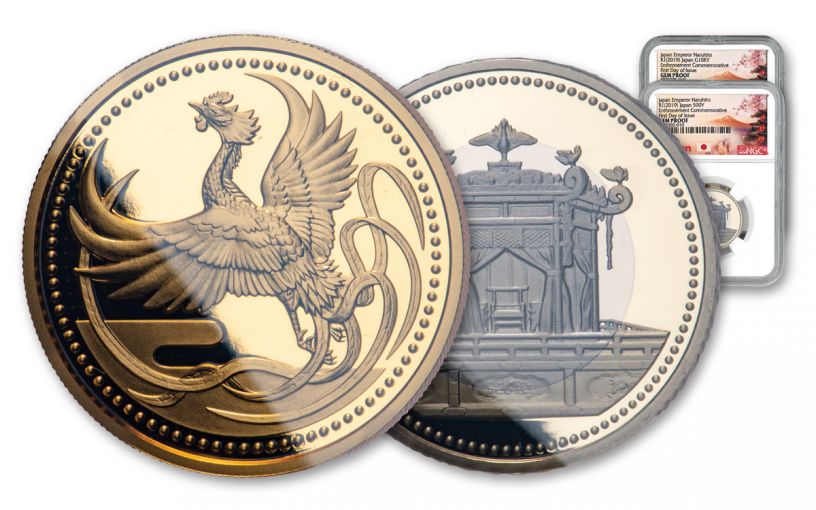 Availability: Call-In Only
This item is only available on a Call-In basis. Please call 1-800-510-6468 to speak to a representative.
Item #
356557
Add to Wish List Add to Wish List Wishlist is for registered customers. Please login or create an account to continue. Add to Compare
Recommended Products
Product Description

Following the abdication of his father Emperor Akihito, Japan’s Emperor Naruhito ascended to the throne in the spring of 2019 to become the 126th monarch according to Japan’s traditional order of succession. But that wasn’t the end of it. Naruhito still had to complete a series of ritual ceremonies attended by foreign dignitaries from more than 180 countries. Finally, on October 22, 2019, Naruhito completed his ascension to the Chrysanthemum Throne in the Sokui no Rei ceremony during which he officially proclaimed his status as emperor to the world.

To honor this solemn and historic event, Japan has released a pair of coins commemorating Naruhito’s enthronement – the FIRST commemorative Proof coins issued under his reign. Unfortunately, the mintage was relatively small – just 27,000 two-coin sets were produced – and it proved to be an immense hit right out of the gate. In fact, the Japan Mint received more than 370,000 purchase applications and had to resort to a lottery system to determine who would own these coins in the Asian markets. Luckily, 10% of the mintage was set aside for foreign buyers and we did our best to secure as many of those sets as possible.

The two legal-tender coins included in the set are a 10,000 Yen coin struck in 20 grams of 99.9% gold and a 7-gram copper-nickel (CuNi) coin bearing a denomination of 500 Yen. The gold coin is a superb creation that depicts a mighty phoenix, its wings spread wide, in representation of the emperor. Why a fiery bird? It’s simple: An actual image of the emperor is typically never used as it is considered disrespectful to depict an emperor on coinage. The copper-nickel coin features the Imperial Throne that was used during Naruhito’s enthronement ceremony. The reverse of each coin features the Imperial Crest of the Chrysanthemum – an image that has graced Japanese coins for centuries.

Each coin in this amazing two-piece set has been graded by the Numismatic Guaranty Corporation (NGC) as being in gorgeous Gem Proof condition, meaning that they were expertly crafted by the mint from hand-selected planchets, polished dies and multiple strikes to produce beautifully frosted details rising over mirror-like fields. In addition, NGC has certified your proofs to be First Day of issue (FDI) coins, a designation that means your coins were received by NGC or an NGC-approved depository by the release date or on the business day within 24 hours of the official release date.

Your set will arrive in a deluxe presentation case and will be accompanied by a mint-issued Certificate of Authenticity. Based on demand alone, these coins are sure to become one of 2019’s hottest international issues. They’re already sold out at the mint so hurry and secure yours now before our limited supply runs out!

Worldwide demand for the 2019 Japan Emperor Naruhito Enthronement Two-Piece Proof Set has been overwhelming. Don’t miss out on this incredible numismatic event. Click one to your cart today while they are still available!