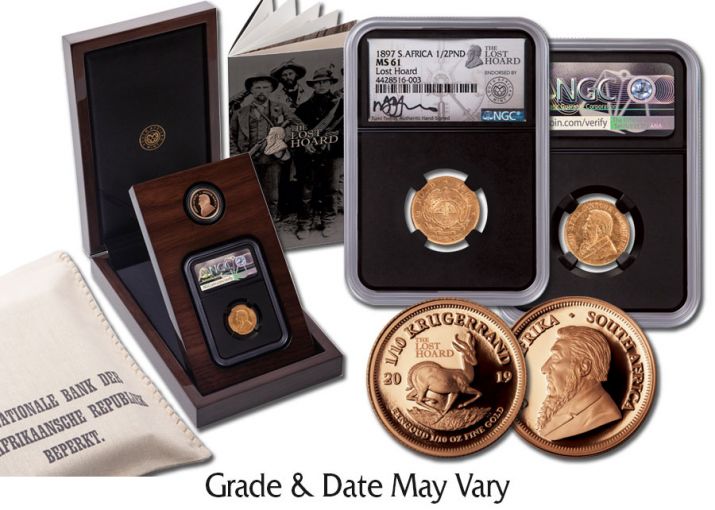 Availability: Call-In Only
This item is only available on a Call-In basis. Please call 1-800-510-6468 to speak to a representative.
Item #
363276
Add to Wish List Add to Wish List Wishlist is for registered customers. Please login or create an account to continue. Add to Compare

The Grandfather of the Krugerrand

The South African Gold Krugerrand is the world’s first modern gold bullion coin. But in the late 19th century, South Africa had a different gold coin: the Pond. Struck from 1892 to 1900, the Pond circulated at a time when the nation was fighting to throw of the shackles of British domination. Each coin features the same obverse as the Krugerrand: South Africa’s first president, Paul Kruger, a design that gave the coin the nickname of “The Grandfather of the Krugerrand.”

Discovery of the Lost Hoard

Recently, a large hoard of Ponds and Half Ponds was discovered in Europe, housed in an original mint bag. Due to the political turmoil of the time, most Ponds were destroyed or lost during South Africa’s Revolutionary War. Thus, a Gold Pond hoard of this size is very unusual. The South African Mint stepped in and acquired the entire hoard and then sent the coins off to the Numismatic Guaranty Corporation (NGC) for grading and certification. And now they’ve returned, ready to become a part of your collection complete with labels certifying them as coming from “The Lost Hoard.”

Not only can you acquire a seldom-seen single Gold Half Pond coin in this offer, but it’s an 1895-dated coin graded in nice About Uncirculated-50 (AU50) condition with the detail of its strike still visible more than 120 years later. Plus, in this offer you’ll receive a special 2019-dated Tenth-Ounce Gold Krugerrand in Gem Proof condition with a “Lost Hoard” privy mark. The Half Pond coin measures 19.4 mm in diameter while the Tenth-Ounce Krugerrand measures 16.5 mm in diameter. Both feature the same 91.7% (22 karat) gold fineness and NGC has sonically sealed the coins in acrylic display holders.

In addition, each Gold Half Pond ‘s label will and feature the signature of Tumi Tsehlo, former Managing Director of the South African Mint and the architect who helped secure this amazing hoard. Both coins will come beautifully housed in a custom wood presentation case along with a Certificate of Authenticity from the South African Mint, a story booklet on the Lost Hoard, and a reproduction of the mint bag the hoard was discovered in.

Krugerrands with the special “The Lost Hoard” privy mark are only available as a part of this incredible release. Just 233 of these coins were ever struck, making them the lowest mintage Tenth-Ounce Gold Krugerrands ever struck by the South African Mint. If you’re a Krugerrand collector, or ever thought about becoming one, this set is an absolute, no-bones about it, must-have. Don’t miss this opportunity because when these coins are gone who knows when we will ever be able to offer them again!

Don’t miss your chance to secure “The Grandfather of the Krugerrand” paired with a low-mintage privy-marked Krugerrand with this spectacular 1895 South Africa Gold Half Pond and Tenth-Ounce Gold Krugerrand Lost Hoard Two-Piece Set. Only limited quantities are available so order yours now!