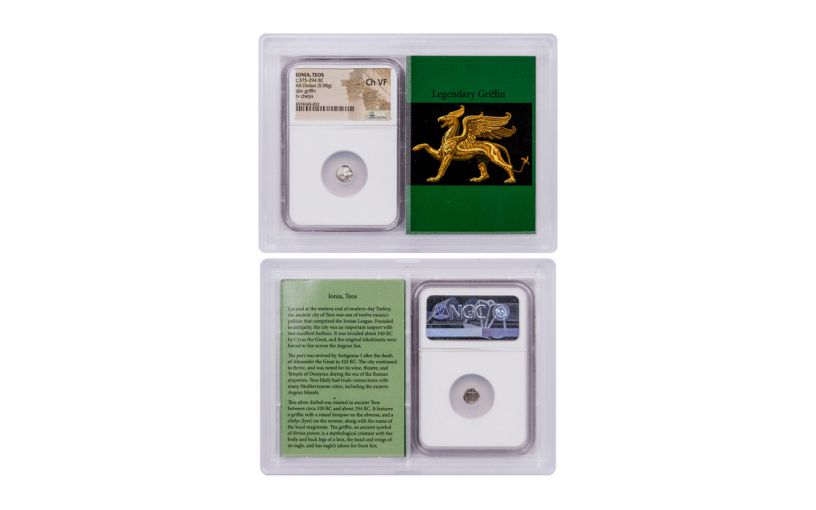 Availability: Out of Stock
This item is currently Out of Stock. Please sign up to be notified if this product becomes available.
Item #
346354
Add to Wish List Add to Wish List Wishlist is for registered customers. Please login or create an account to continue. Add to Compare

A Vintage Coin from the Ancient Greek World’s Party Town

The ancient Greek city of Teos was once a vibrant trading port on the coast of Ionia which is now part of western Turkey. Located on a low hilly isthmus, it was a flourishing seaport with two fine harbors until Cyrus the Great of Persia launched an invasion into Asia Minor. Seeing the handwriting on the wall, the city’s residents packed up their belongings and sailed away. The town was later revived and became known far and wide for its delicious wine, exciting theater and a Temple dedicated to Dionysus – the god of wine, fertility and what would be described today as wild parties. His Roman name is Bacchus and it’s where the term “Bacchanalian” comes from, meaning drunken revelry.

With a history like that, one wonders if when the Teans sailed away to escape Cyrus that they weren’t sailing on party boats!

Today all that is left of Teos are a few ruins and farmland that every now and then surrenders an artifact from more than 2,300 years ago. Fortunately, some of the coins from that vibrant era occasionally surface to remind us about the shifting tides of conqueror and conquered during the ancient Greek world. Take these silver Diobol coins for example. Struck in the city of Teos between 375 and 294 BC, they are fantastic treasures that you can hold in the palm of your hand. The obverse features a Griffin while the reverse shows a chelys. Both are significant symbols of Teos and its people.

The Griffin is a mythical creature with the body, tail, and back legs of a lion; and the head and wings of an eagle. Its front feet often appear as an eagle's talons. Thought to be the king of all creatures, Griffins were associated with wealth and were believed to lay eggs that contained gold nuggets. The griffin was sacred to Apollo, to whom most of Ionian cities worshiped, but nowhere more so than in Teos, where the city’s population held Apollo in particularly high regard.

The Chelys, is a multi-stringed instrument that uses the hollowed-out shell of a turtle as its soundbox. It was a common lyre of the ancient Greeks and its name refers to the lyre invented by the god Hermes, who made the instrument to help him steal 50 prize cattle from Apollo’s sacred herd. Upon discovering the theft – and the rascal who was responsible – Apollo was placated only when he heard Hermes play the instrument. He became so enamored with the sound that he agreed to trade the cattle for the chelys. From there, Apollo soon became the undisputed master of the instrument and taught others how to play it. During wine festivals and other parties, Teans were known to dance wildly while playing the chelys.

Your ancient coin will also come certified and graded by the Numismatic Guaranty Corporation (NGC) as being in stunning Choice Very Fine (Ch VF) condition. Each also comes in a Story Vault holder with a fact-filled storycard. Don’t wait; add this Silver Diobol of Teos to your cart and become a curator of world history today!