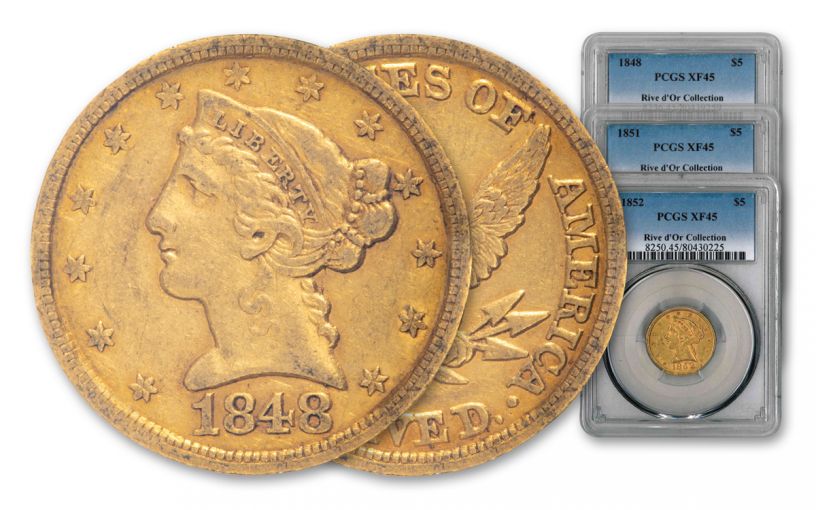 Availability: Call-In Only
This item is only available on a Call-In basis. Please call 1-800-510-6468 to speak to a representative.
Item #
351877
Add to Wish List Add to Wish List Wishlist is for registered customers. Please login or create an account to continue. Add to Compare

In 1848, the cry of “Eureka” rang out through the cool January air in Sutter Creek near Coloma, California. The California Gold Rush was on! This single discovery is one of the most historic events in 19th century America – and you can own a small piece of that discovery when you secure this enticing $5 Gold Liberty set from the Rive d’Or Collection – a hoard of vintage U.S. gold coins that escaped the melting pots overseas.

Struck as a direct result of the California Gold Rush, these coins come minted in highly pure 90% fine American gold and feature the bust of Liberty facing left, while the reverse features a spread eagle holding an olive branch and arrows. Struck during the first years of the California Gold Rush, this three-coin set includes $5 Gold Liberty Half Eagle coins struck at the Philadelphia Mint in 1848, 1951 and 1852. These coins are the “No Motto” type appearing without the IN GOD WE TRUST motto that was later part of a ribbon engraved above the Eagle on coins struck beginning in 1866 following the Civil War.

Each has also been graded by the Professional Coin Grading Service (PCGS) as being in Extremely Fine-45 (XF45) condition, a grade that indicates these coins actually changed hands multiple times in commerce. Who knows what adventures they experienced before, during and after the Civil War? What we do know for sure is that they found their way across the Atlantic Ocean where they were ultimately discovered in the Rive d’Or Hoard – a significant piece of history which may have just saved these coins from the melting pots!

So, while vintage U.S. gold was being worn down in commerce and/or melted in America, these coins survived for more than a century locked in a vault in Europe where it had been pieced together by a collector seeking financial security. When the treasures of the Rive d’Or Hoard were finally released in 2008, it contained many gold coins from the United States that were acquired before, during and after WWII as well as many other world coins from the 19th and 20th centuries.

These coins are some of the lucky few to have survived the melting pots, and each is a historic piece of U.S. history for you to hold in your hands. Just two 3-coin sets have been assembled. Hurry and secure yours now!

Struck more than 165 years ago as America wrestled with what to do about the institution of slavery, these coins have finally returned from Europe and are just waiting to join your collection. Click this three-coin set to your cart and make it a prized addition to your own personal hoard!