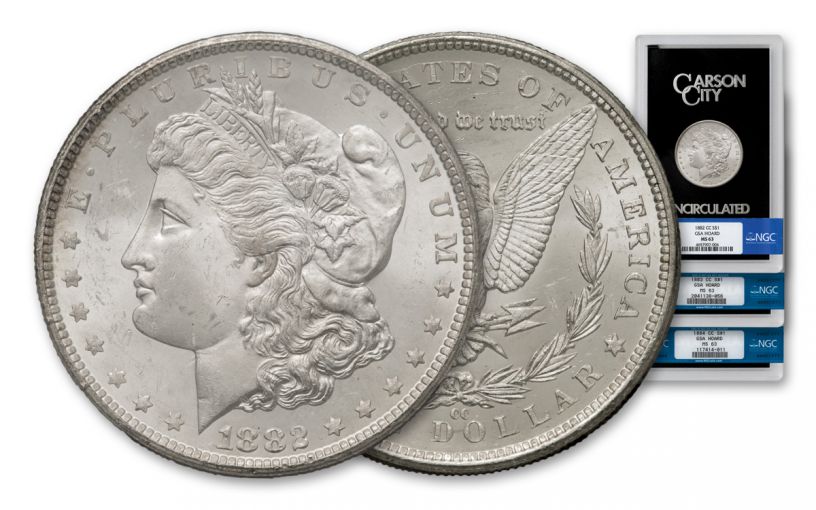 Availability: Out of Stock
This item is currently Out of Stock. Please sign up to be notified if this product becomes available.
Item #
353102
Add to Wish List Add to Wish List Wishlist is for registered customers. Please login or create an account to continue. Add to Compare

Start Your Morgan Collection With This Three-Piece Set of “CC” Coins in Original GSA Holders!

There’s no doubt about it, the U.S. Morgan Silver Dollar is one of the most heavily collected coins in the world. With legions of fans not only in America but in Europe, the Middle East and Japan all captivated by its history and silver purity, it’s no wonder it’s called the King of Coins! And among the royalty that is the Morgan Silver Dollar, one mint mark stands above the rest — the “CC” of the Carson City Mint.

While millions of Morgans were struck during the coin’s 28-year history, some of the most coveted are the CC Morgans. That’s because the Carson City Mint struck the Morgan Silver Dollar for just 13 years from 1878-1885 and again from 1889-1893. In total, the fabled Carson City Mint produced just 2% of all Morgans ever struck!

Unfortunately for today’s collectors, million of Morgans were melted thanks to the Pittman Act of 1918. A generation later, the Silver Act of 1942 melted more Morgans. Many more fell victim to the melting pots in the early 1980s when the price of silver shot up to $50 an ounce. So, while millions of Morgans were struck from 1878 through 1921, massive silver meltings and the ravages of time have taken their toll. Today coin experts believe that only 15% of all Morgans ever struck remain in existence. And with only a small fraction of the entire Morgan Dollar mintage struck at the Carson City Mint, it’s a wonder any CC Morgans exist today!

Following the release of the famed Treasury Hoard in the early 1960s, a key discovery was made. After performing an audit on the remaining inventory, government inspectors found that there were nearly 3 million CC Morgans left. To avoid another buying frenzy, the Government Services Administration (GSA) encapsulated these coins in special slabs and sold them in a series of seven releases between 1972 and 1980. Many of these coins were broken out of the original slabs, meaning few of these original GSA-slabbed Morgans remain.

Now you can add a trio of these historic Morgans to your personal collection with this three-piece set featuring Morgans struck at the Carson City Mint from 1882 to 1884. Not only will each CC mint-marked Morgan Silver Dollar come sonically sealed in its original GSA holder, but each will be graded by the Numismatic Guaranty Corporation (NGC) as being in Choice Uncirculated Mint State-63 (MS63) condition.

This is a wonderful starter set of three Morgans from the GSA release. Plus, the original mintage for these coins combined was only 3,473,000. Of that limited number, NGC has graded a combined total of only 89,928 GSA coins. These sit squarely in the middle, with 52,341 GSA coins graded higher. While the world-famous National Numismatic Collection at the Smithsonian® in Washington, D.C. has an 1884-CC Morgan in MS63 condition and an 1883-CC Morgan in MS64 condition, it does not have an 1882-CC in any condition.

Carson City GSA Morgan Silver Dollars get harder to find each year as and more and more are cracked out of their GSA holders and disappear into private collections. Only seven of these sets are currently available, so secure yours and begin your GSA Morgan collection today!

AMERICA’S MOST POPULAR COIN – The Morgan Silver Dollar – so named for its designer, U.S. Mint Assistant Engraver George T. Morgan – has stood the test of time. Struck from 1878-1904 and again in 1921, it was the coin of America’s “Wild West” and jingled in the coin purses of gamblers, gunfighters, soldiers and dance hall girls.

CLASSIC DESIGNS – Morgan’s historic design depicts a profile of Lady Liberty on the obverse while the reverse features an eagle with outstretched wings. The model used for Liberty was Miss Anna Williams of Philadelphia, who Morgan declared to have the most perfect feminine profile he had ever seen.

STRUCK IN GLEAMING AMERICAN SILVER – Struck in 26.73 grams of 90% silver from the famous Comstock Lode, the Morgan Silver Dollar is a big coin 38.1 mm in diameter. When this coin was plunked down on a counter, its weight meant real money, pure and simple.

LEGAL TENDER SILVER DOLLAR – Morgans were $1 legal tender and struck during the heyday of America’s Wild West era where coins were overwhelmingly preferred over paper currency.

GRADED IN CHOICE UNCIRCULATED CONDITION – Not only will each coin in your 1882–1884-CC Morgan Silver Dollar Three-Piece Set come sonically sealed in its original GSA holders, but each will be graded by the Numismatic Guaranty corporation (NGC) as being in Choice Uncirculated Mint State-63 (MS63) condition.

THE CASE OF THE DISAPPEARING MORGANS – While millions of Morgan Silver Dollars were struck from 1878 through 1921, massive silver meltings and the ravages of time have taken their toll. Today coin experts believe that only 15% of all Morgans ever struck remain in existence!

Don’t miss your chance to get this three-piece set of Carson City Morgan Silver Dollars in their original GSA holders. Quantities are extremely limited so click this two-piece set to your cart right now!