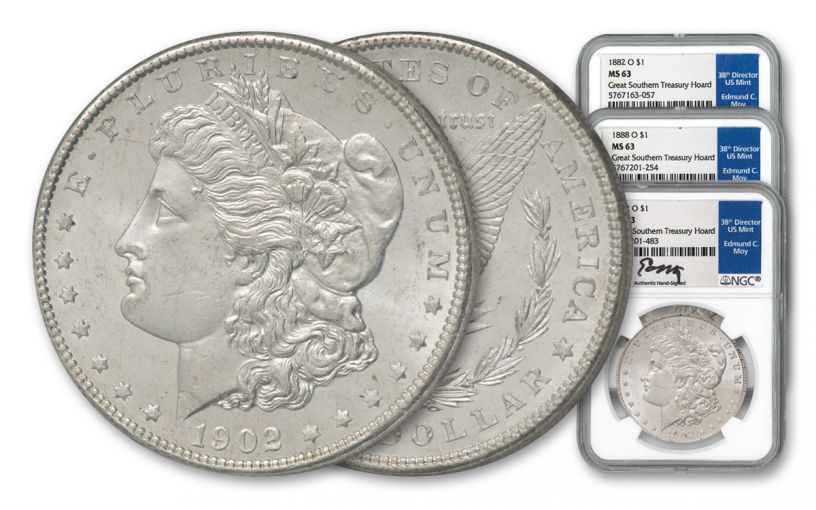 Availability: Call-In Only
This item is only available on a Call-In basis. Please call 1-800-510-6468 to speak to a representative.
Item #
355261
Add to Wish List Add to Wish List Wishlist is for registered customers. Please login or create an account to continue. Add to Compare

After this man passed away, his family decided to honor his legacy by making these coins available to an eager public. Now you can own a piece of the incredible Great Southern Treasury Hoard with this three-piece set consisting of Morgans struck by the New Orleans Mint in 1882, 1888 and 1902. Not only has each coin been graded by the Numismatic Guaranty Corporation (NGC) as being in stunning Choice Uncirculated Mint State-63 (MS63) condition, but NGC has also sealed them in protective coin capsules and added a special pedigreed label certifying that they hail from the famous Great Southern Treasury Hoard.

In addition, each label was personally signed by Edmund Moy, 38th Director of the U.S. Mint. During his time as director from 2006 to 2011, Moy oversaw the launch of several popular modern coins including the America the Beautiful Quarters® Program. You’ll also receive a certified section of a New Orleans Mint bag from the actual hoard, an authentic 19th century New Orleans newspaper (not a reprint!), an 1870s Louisiana bond, a storybook on the Great Southern Treasury Hoard, a storybook on the U.S. Treasury Hoard and a storycard on the New Orleans Mint.

As you can imagine, these sets are extremely limited, so don’t wait; secure your piece of this fantastic discovery by adding this Morgan Silver Dollar Great Southern Treasury Hoard Three-Piece Set to your cart right now!

Get a piece of the Great Southern Hoard of Morgan Silver Dollars from the original U.S. Treasury Hoard with this three-piece set of New Orleans Mint Morgans in high-grade Mint State-63 condition and pedigreed by NGC as being from this amazing hoard!