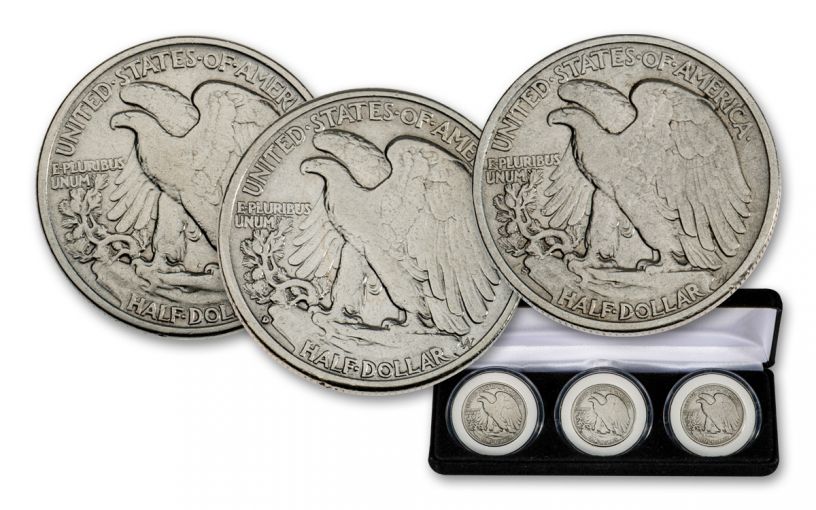 Availability: Available for Order
This item will ship 04/02/21
Item #
357342
Add to Wish List Add to Wish List Wishlist is for registered customers. Please login or create an account to continue. Add to Compare

Struck from 1916 to 1947, the Walking Liberty Half Dollar is one of America’s most classic coins, with a design by Adolph Weinman of Liberty striding towards the rising sun while wrapped in an American flag. Struck in 90% fine silver, this series endured through two World Wars and the Great Depression, coming out of the Philadelphia (P – no mintmark), Denver (D) and San Francisco (S) Mints.

This three-coin mintmark set brings together one Walking Liberty Silver Half Dollar from each mint that struck the coin. Each set will come beautifully housed in a display box and accompanied by a Certificate of Authenticity. This is the coin that inspired the Silver Eagle decades later. Get your Walking Liberty Half Dollar Mintmark Set now. Dates vary.

ONE OF AMERICA’S MOST POPULAR COIN DESIGNS – Featuring Adolph A. Weinman’s classic design of “Walking Liberty,” the half-dollar coin issued from 1916-1947 is hailed as one of the most beautiful coins ever struck. It’s so revered that when the U.S. Mint introduced its American Silver Eagle bullion coin in 1986 it used Weinman’s iconic design!

COMPLETE MINTMARK SET – This set brings together a coin from each mint that struck the Walking Liberty Silver Half Dollar: the Philadelphia (P – no mintmark), Denver (D) and San Francisco (S) Mints. Dates vary.

STRUCK IN FINE SILVER – Each Walking Liberty Half-Dollar is struck in 12.5 grams of 90% silver and measures 30.6 mm in diameter.

LEGAL-TENDER COINS –With a face value of 50 cents, the Walking Liberty Half Dollar was a big silver coin that circulated widely during the first half of the 20th Century.

The Walking Liberty Silver Half Dollar is a true American icon – and now you get a coin from each mint that struck the series from 1916-1947! Order yours now!