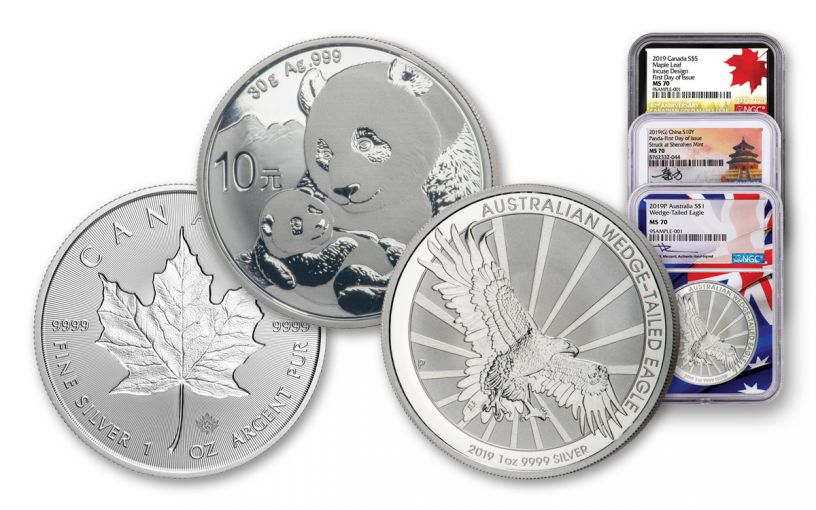 Availability: Call-In Only
This item is only available on a Call-In basis. Please call 1-800-510-6468 to speak to a representative.
Item #
355057
Add to Wish List Add to Wish List Wishlist is for registered customers. Please login or create an account to continue. Add to Compare

The Finest 2019 Silver From Around the World

Here’s your chance to get some of the finest silver coins from around the world in a spectacular three-piece set of 2019-dated releases. All three of these coins are among the most popular silver coins in the world. And what’s more, each has been graded by the Numismatic Guaranty Corporation (NGC) as being in flawless Mint State-70 (MS70) condition, a distinction that means your perfectly-graded coins will have ZERO imperfections – showing all features and fields exactly as the engraver and mint intended!

This set begins with a 30-Gram Silver Panda from China. A spectacular release, this entry in the popular series features jaw-dropping razor-sharp designs. In fact, NGC has even certified it as being a First Day of Issue (FDI) release, meaning it was received by NGC or an NGC-approved depository by the release date or on the business day within 24 hours of the official release date. It has also been sonically sealed in an acrylic holder with an exclusive label that not only identifies it as having been “Struck at Shenzhen Mint” but features the hand-written signature of Tong Fang, designer of 2019 issue’s the one-year-only reverse.

Next is a 2019 One-Ounce Silver Wedge-Tailed Eagle from Australia that features a one-year-only design created by John Mercanti, the United States Mint’s 12th Chief Engraver. Mercanti’s partnership with Australia’s Perth Mint represents the first time that a former Chief Engraver of the United States Mint partnered with a foreign mint to create a legal-tender coin. The coin has been sonically sealed in an acrylic capsule with a unique Australian flag core. It has also been encapsulated with a label personally signed by Mercanti himself.

Last is a 2019 One-Ounce Silver Incuse Maple Leaf from Canada. Struck by the prestigious Royal Canadian Mint and released on the 40th anniversary of the Gold Maple Leaf series, the coin displays the traditional Sugar Maple Leaf design on the reverse and a portrait of Queen Elizabeth II on the obverse – which are both displayed below the surface of the coin rather than above it! In addition, it also comes certified by as NGC as a First Day of Issue coin. Collectors seek out coins with this certification because they are produced with new dies and have sharper strikes and deeper mirrors than those that are struck later

Get a taste of some of 2019’s finest issues and secure your set now!