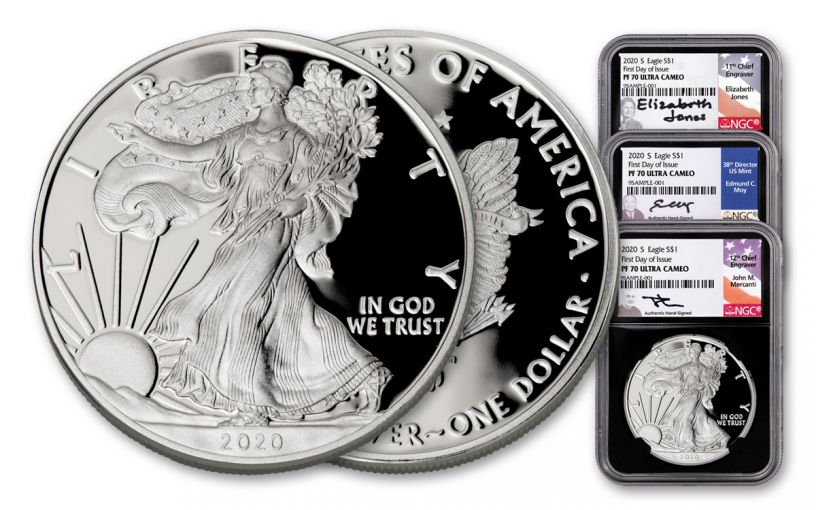 Availability: Call-In Only
This item is only available on a Call-In basis. Please call 1-800-510-6468 to speak to a representative.
Item #
367386
Add to Wish List Add to Wish List Wishlist is for registered customers. Please login or create an account to continue. Add to Compare

First Authorized by Congress in 1986, the One-Ounce Silver Eagle has become an easy and affordable way for individuals to own silver for the last 33 years. While millions of these highly pure silver bullion coins are struck annually, the Silver Eagles that savvy collectors desire the most are those in gleaming Proof condition. However, the U.S. Mint has revealed plans to update the iconic reverse of the Silver Eagle in 2021. That means the coins in this 2020 Silver Eagle Three-Piece Proof Set are from the final year of issue for this original beloved design!

The Proof version of this spectacular coin has always featured razor-sharp details and impressive mirrored finishes. They are struck in the thousands compared to the millions for the bullion editions. And now you can order the 2020 proof version specially struck at the San Francisco Mint. If you’ve already acquired the 2020 Silver Eagle Proof struck at the West Point Mint and want to complete your collection, you’ll want to get this three-piece set ASAP due to the fact that they are struck in smaller quantities than their counterparts from West Point. That’s why you’ll need to act fast because who knows how long before these coins disappear into hands of other eager collectors!

These 2020-S American Silver Eagle Proofs have been graded by the Numismatic Guaranty Corporation (NGC) as being in flawless Proof-70 Ultra Cameo (PF70UC) condition, a distinction that means these perfectly-graded proofs have ZERO imperfections — showing all features and fields exactly as the engraver and mint intended! In addition, NGC has certified that these proofs are First Day of Issue (FDI) coins, meaning they were received by NGC or an NGC-approved depository by the release date or on the business day within 24 hours of the official release date.

Signed By a Trio of Coin Giants

To top it off, your coins will be sonically sealed in individual acrylic holders and encapsulated with labels personally signed by a trio of legends in the coin world. One will include a label signed by the John M. Mercanti, the U.S. Mint’s 12th Chief Engraver! A giant in the numismatic world, Mercanti has produced more coin and medal designs than any person in U.S. Mint history! The second will include a label signed by Elizabeth Jones, the 11th Chief Engraver of the U.S. Mint! Still the only woman ever to serve as the Mint’s chief engraver, Jones was appointed in 1981 by President Ronald Reagan. She served from 1981 to 1990 and oversaw two of the Mint’s most popular coin programs: The Gold and Silver Eagles. The third will be signed by Edmund Moy, who served as the 38th Director of the U.S. Mint from 2006 to 2011. During his time as director, Moy oversaw the launch of a number of popular modern coins including the America the Beautiful Quarters Program.

Silver Eagles like these are perennial favorites, usually flying out of our vaults as soon as they arrive! Whether you're new to the series, a diehard collector or a silver stacker looking to add to your reserve, this is your chance to secure a trio of immaculate 2020 Silver Eagles for your very own. Don't wait — order yours today!